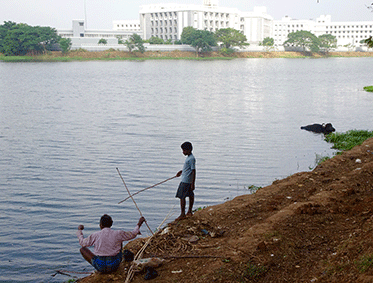 The Water-Pondi project (2018-2020) is dedicated to the study of the management of water resources in Pondicherry. The scientific results are expected to establish an accurate diagnosis of the water cycle circulation in the Territory, both for surface and ground water, especially in the watersheds of two lakes, Ousteri and Kanagan. The project aims to propose an inventory of good practices guaranteeing the quantity and quality of drinking water in areas where climate and human impact activities limit access to a natural resource in sufficient quantity and quality. Headed by Marc Desmet, the project is funded by the French Region Centre-Val de Loire and links the IFP to labs from the universities of Tours (GéHCO – leader-, CITERES…) and Orléans (LEO) as well as the Indo-French Centre for Groundwater Research (BRGM-NGRI, Hyderabad), Anna University, etc.

In Pondicherry district, the groundwater level is dropping and saline intrusion extends up to 10 km inland. Although there is no scientific data on this subject (filling this gap is one of the goals of this study), sediment silting is accentuated by changes in agricultural practices and a rapid transfer of silt to the water bodies. The available storage space is reduced and the resource is degraded. Urbanization and local industrial activities generate discharges of trace metals, organic pollutants and more generally a cocktail of endocrine disruptors. On the other hand, water bodies are increasingly seen as natural and cultural heritage sites providing ecosystem services such as leisure and tourism, wildlife conservation, etc. Their place in urban planning cannot but grow, thanks to programmes of urban renewal such as the Smart City project launched in Pondicherry in 2018.

One of the priorities of the Water-Pondi project will therefore be to characterize all the mechanisms of degradation (in quantity and quality)  of the surface and groundwater bodies that surround two ancient lakes (tanks, eri), one in a rural area, the Ousteri/Ossudu lake, and the other in an urban area, the Kanagan tank (photo). Both are no longer used for surface irrigation. The Ousteri lake covers 800 hectares and is 12 km east of Pondicherry's downtown. Presently an almost endorheic percolation tank, it is an important biodiversity site in South East India, even though the bird population seems to have dramatically declined in the last decade. In the watershed, farmers grow rice and sugarcane using borewells: the relationship between the tank and the aquifers is yet to be examined. The hyper-eutrophication of the lake for over 20 years might be linked to changes in agricultural practices leading to the transfer of nutrients and pesticides and to increased accumulation of sedimentary infill. Kanagan tank is much smaller, encroached on by private and government buildings. Its location within the city is a direct threat to its survival, but it can also be an asset if the local municipality adheres to its plan of a promenade around the lake and if the ecosystem services are recognized.

While supporting colleagues in bio-physical sciences from other institutions, the IFP's team of social scientists will focus on studying the multifarious – sometimes competing –  uses of the tanks and their multiple stakeholders, including representations of the two water bodies in the popular imagination. This research will synergise with the programme on conservation ecology just launched by the department of Ecology of the IFP.