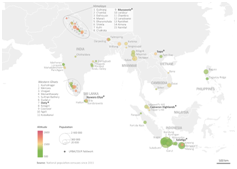 Small and medium-sized cities account for more than half of Asia's population, yet they remain largely unstudied, especially when compared to large cities. Looking at hillstations founded during the colonial period in India, Sri Lanka, Vietnam, Indonesia and Malaysia, URBALTOUR intends to fill this gap by analyzing the overlap between urban and tourist dynamics in mountainous areas. Historically, hill stations were designed as new frontiers of colonization. Today, this function is reactivated by the pivotal role they play in the expansion of globalized urban societies into mountains. In many cases, their permanent resident population has risen, their economy has diversified, and their tourist frequentation is now primarily driven by a domestic clientele. In addition, the combined effects of COVID and global warming are currently reinforcing their appeal, bringing back their historical sanitary function and turning them into places of refuge from the heat and diseases associated to lowland cities.

This interaction between tourism and urbanization in vulnerable areas like mountains raises obvious environmental, social and economic sustainability issues, as evidenced by the intensified commercial exploitation of natural resources, the pollution that comes with the land artificialization and the inter-ethnic tensions over the sharing of wealth between local actors. URBALTOUR, intersectional approach to inequalities in the access to tourism resources will enable us to assess the inequalities and discriminations at work, and push forward sustainable alternatives. By doing so, URBALTOUR fully contributes to the scientific axis Urban societies, territories, constructions and mobilities and more specifically to theme 1, "City Territories'' addressing issues on growth, morphology and urban planning, urban practices of tourist mobility, governance and citizen engagement, as well as management and revival of heritage. URBALTOUR poses two fundamental hypotheses: 1/ Tourism is a vehicle for new urban models, whether in terms of means of transport, architecture, urban expansion or management. 2/ Tourism contributes to profound restructuring of stakeholder systems, leading to renewed modes of governance and legitimizing forms of violence in urban production.

The methodology of the project is hybrid, combining quantitative and qualitative methods. On a macro level, the intention is to establish an inventory of hill stations and measure the ties between tourism and urbanization through GIS and spatial analysis. On a micro scale, a comparative methodology will be deployed across 6 research field selected for their representativity according to 4 comparative dimensions: a/ the tools of urban production by and for tourism, b/ the distinctive use of colonial heritage, c/ the reclaiming of mountains through the design and practice of tourist sites, and d/ a digital ethnography of online city branding and tourist practices.

Covering the three largest European colonial empires, the novelty of URBALTOUR is double: 1/ it theoretically supports the concept of subaltern urbanization within neglected fields, thus contributing to a new epistemology of the urban, and 2/ it focuses on domestic tourist flows, rather than international ones, thereby decentering knowledge in a postcolonial perspective. Finally, the URBALTOUR project strengthens inter-UMIFRE collaborations between the Institute of Research on Contemporary Southeast Asia (IRASEC), for the Vietnamese, Malaysian and Indonesian part of the project, and the French Institute of Pondicherry (IFP), for the Indian and Sri Lankan part.