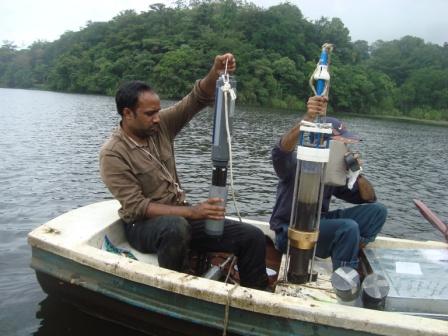 (i) To reconstruct the dynamics of land-cover changes in the study area and its catchments using biological proxies (pollen, if required – phytoliths) by understanding the vegetation history through time and land-use changes during the most recent periods.

(iii) To contribute to the overall evaluation of Quaternary vegetation and climate history using a multi proxy approach and try to relate it with the issue of weakening and strengthening of the monsoon and the delta response to climatic, environmental and other forcing, including human induced, in the most recent period.

The first palynological results from a late Holocene (~5000 ago) section (~11m) of a sediment core at Porayar in the Cauvery delta (study area map), recording interesting vegetation changes, linked to climate and sea level changes and human impacts is presented in Figure 1; the top part of the core showing a marked increase in Chenopodiaceae/Amaranthaceae pollen type is interpreted as swampy, possibly pre-mangrove establishment, while the prevalence of substantial forest pollen markers both evergreen and deciduous, till nearly 1000 years ago is remarkable considering that at present, even scrub thickets are not found near the coring site.

These initial results suggest a great potential. Hence, fine resolution pollen analyses in this section of the core and coarser resolution studies on the 11-20m section of the core (almost covering the entire Holocene, ie ~10000 years ago) are ongoing; complementary studies, exploring the phytolith record of this section mainly to bring to light the cultivation practices will also be initiated.

Future Plan of work and perspectives

Further, as a total of nine cores have been collected in North-South and East–West transects to cover the cross section of the floodplain cum delta area of the Cauvery (study area map), an additional core, at Uthirangudi, more inland (ie, southwest of Poryar) has also been initiated for both pollen and phytolith analyses. Multiple proxies, especially stable carbon isotopes and geochemical markers are also being explored by collaborators, who have already established the chronology of this core (Alapatt et al, 2011). A third core at Kadalangudi (Study area map), north of Uthirangudi and north west of Porayar has also been taken up for analyses; in this core, we have started with phytolith analyses in order to delineate the human impact signal, especially agricultural settlement, but eventually multiple proxies, especially pollen will also be analyzed.

The cores were collected by Singh P. and collaborators (Department of Earth Sciences, Pondicherry University) in the framework of a project  financially supported by the DST, New Delhi, as a part of their SSS (Science of the Shallow Subsurface) initiative.