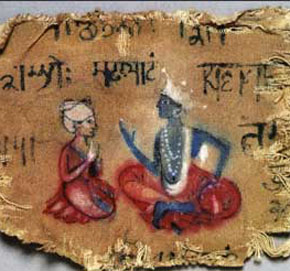 In Sanskrit culture, Grammar (vyakarana) is given a central place. It is even considered as the first science (sastra). The Astadhyayi of Panini ( 4th century BC), codifies what we term as " classical " Sanskrit. A long series of commentaries have elucidated this over more than 2000 years old complex seminal text. Although the Paninian Grammar is still alive, its understanding is confined to a few traditional scholars (pandits) only. In addition to the interest which it generates in itelf, this astonishingly scientific grammar constitutes the first traditional tool of interpretation of the Sanskrit texts. Hence it is essential for all Sanskrit scholars, indologists, grammarians and linguists to know of it. The objective of this project is to develop a tool which will provide these end users with a general understanding of its field of application as well as the functioning of the complex system that it represents.

A dictionary, no longer based on the rules (sutra-s and varttika-s) but on the other element of grammar i.e the examples (udaharana) found in the four major commentaries of the Astadhyayi (Mahabhasya, Kasikavrtti, Bhasavrtti and Siddhantakaumudi) dating from the 2nd century BC to the end of the 16th century AD, has been conceptualised. Our of the over 40,000 different examples provided by these commentaries, the examples given by Bhattoji Dikshita form the substance of the articles that are the main part of the different volumes of the dictionnary. The articles explain the pertinence of these examples as well as describe the sequel of operations necessary for arriving at the concrete form. Additional remarks, as and when needed, have been incorporated. Six or seven indexes complement each volume, the toal number of which will be 9. This practical dictionary is conceived with the view to acquaint the targeted public with the knowledge of traditional Indian grammarians presently involved in collaborative work with western grammarians.
The dictionary will eventually be presented in the form of a series of 9 CD ROMs. The first contains the entire corpus of examples and the remaining 8 correspond each to a section of Bhattoji Dikshita's Siddhantakaumudi