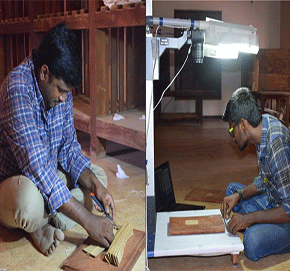 The study of Indian mathematics has traditionally focused on a list of canonized Sanskrit treatises. This focus on elite scholarly sources highlighted abstract conceptions, using contemporary or other major historical mathematical cultures as reference points. This research has largely ignored vernacular mathematics, often assuming it was derivative, inferior or insignificant. But mathematics was part of the everyday lives of many Indians through labor, craft, commerce and taxation. In South India (in particular Tamil Nadu and Kerala), we have substantial vernacular mathematical literature (in Tamil and Malayalam). The focus on the canon has significantly biased our understanding of the history of mathematics in India and detached it from its particular historical and contextual meanings. Theoretical frameworks that consider mathematics as practice rather than as a set of abstract ideas may fix this bias.

We as a group of scholars have come together to initiate a Programme in the Social History of Mathematical Practices in India, studied primarily, through the vernacular sources of most Indian languages. We are beginning this work with respect to Tamil and Malayalam speaking regions to begin with. During this phase, we wish to analyze cognitive and socio-political aspects of mathematical practice in Tamil Nadu and Kerala between the 9th and 16th century. More specifically, we wish to understand how numerical notations and measurement units evolved in their practical context, through processes of standardization and measurement practices. (2) We want to study a mathematical professional – the village accountant – through his education, cognitive development, mathematical conceptualization, social position and political role. We want to understand the relations between the various mathematical spheres in medieval South India: mathematics in elementary education, mathematics in professional education, the mathematics of more advanced vernacular treatises, and Sanskrit mathematics. We wish to understand the interactions between these forms of mathematical production, their relation to social divisions (such as castes), and the various conceptualizations of mathematics that they represent.

We aim to study inscriptions with a goal to build a historical atlas of measuring systems in these regions from the 9th to the 16th centuries; build a database and a public archive of sources in Tamil and Malayalam; to identify hitherto unknown and unpublished sources and to critically edit and make available in the public domain.