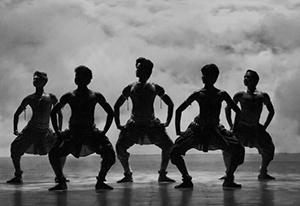 Gatrodi is an anthropological study of the practices of Odissi dance in India, considered by the Indian government to be the classical dance from the State of Odisha. Though the dance is practiced by male and female individuals from diverse geographical locations and status groups, it is generally male practitioners from rural areas of Odisha who are recognised as its legitimate transmitters. The women, who generally belong to urban backgrounds, are considered to be the performers of the dance. However, while they do not obtain the same recognition as the men, some women are actually transmitting Odissi. But then, how does their teaching differ from that of the men?

In order to shed light on this question, the study will investigate on the modalities of transmission of female practitioners in Odissi in India. The methods of inquiry will consist primarily of observation, and also of video and audio recordings of training situations and interviews. These will be undertaken in selective dance schools in Bhubaneswar, capital city of Odisha, and in a metropolitan city of India as well.

Through the above mentioned methodological tools, Gatrodi will produce a detailed ethnographic account of the teaching modalities of the women participating in the study. This shall clarify which methods, be they verbal or non verbal, they implement while transmitting the dance. Consequently, it will be possible to assess which processes are at work in these situations, and how they are related to the social order that prevails in Odissi dance networks. The teaching activities of the women will further be compared to those of the men. In this way, Gatrodi will shed light on the dynamics of transmission of Odissi and the processes of legitimisation of its methods, thereby documenting how, beyond the particular case that is being studied, body practice and social life are interconnected.