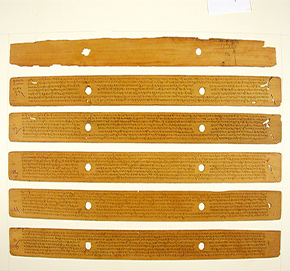 Kāvyadarpaṇa of Rājacūḍāmaṇidīkṣita is a Sanskrit rhetorical text that explains in detail the concept of merits, demerits and consistency of poetry. By understanding this text the composing of poetry becomes easier. Likewise, the grammar, essential for understanding the etymology of language, the Alaṅkāraśāstra (rhetorical treatise) is essential, too, for gaining expertise in poetics.

Not only in developing intellectual skill but also in examining the poems, rhetorical texts play important roles. There is to date no clear evidence about the origin of Alaṅkāraśāstra and there are even some who  say that in the Vedic texts themselves we can find rhetorical discussions.Regarding the present text, Kāvyadarpaṇa, which was written by Rājacūḍāmaṇidīkṣita in 17th century, contains 10 ullāsa-s (chapters) exploring the important principles of Alaṅkāraśāstra. Even though there is an opinion regarding this text which considers it as a commentary on Kāvyaprakāśa of Mammaṭa Bhaṭṭa, the author gives his own view which, in some places, differs from Kāvyaprakāśa.Its individuality among the rhetorical field of Sanskrit is thus demonstrated. The author was the third son of Ratnakeṭaśrīnivāsa, an eminent Sanskrit scholar who flourished in the 16th century. Ratnakeṭaśrīnivāsa had three sons, Keśavadīkṣita, Ardhanārīśvara and Rājacūḍāmaṇidīkṣita.

The author, Rājacūḍāmaṇidīkṣita, left his parents at an early age. His elder brother, Ardhanārīśvara, brought him up and educated him well. Ardhanārīśvara himself was a great scholar who wrote a commentary on Aṃbāstava. Rājacūḍāmaṇidīkṣita, the author of Kāvyadarpaṇa, was an eminent scholar not only in Sanskrit literature but also in all aspects of the Sanskrit language. He wrote commentaries on Upaniṣad-s and also on Yajurveda and as well he wrote texts about Dharmaśāstra. Rājacūḍaṇidīkṣita also wrote texts including Tantraśikhāmaṇi, Maṇidarpaṇa, Ratnaketavijayam, Saṃkarṣamuktāvalī, Bhāratacampūḥ, Raghunāthabhūpavijayam, Alaṅkāracūḍāmaṇi, Rukmaṇiparinayam, Raghavakṛṣnapānḍavīyam, etc. All names of texts written by him were listed in the verses of Kāvyadarpaṇa by the poet himself. Thus, owing to an extraordinary intellectual skill in Sanskrit language and literature the author, Rājacūḍāmaṇidīkṣita, elaborated the rhetorical principles and rules in 10 chapters of Kāvyadarpaṇa. Nine manuscripts in Grantha, Telugu and Malyalam scripts are complete whereas the others are incomplete.

The copies of the manuscripts are available at various manuscript libraries of India including Government Oriental Manuscripts library, Madras, Oriental Research Institute, Mysore, Saraswathi Mahal, Tanjore, Sri Venkateswara Oriental Research Institute, Tirupati, etc. The editing and publishing of  this text with the collating of the manuscripts, around 40, including both complete and incomplete in different scripts, is funded by Rashtriya Sanskrit Sansthan, New Delhi. The project is for three years from January 2018 to December 2020. By the publication of the precious Kāvyadarapaṇa of Rājacūḍāmaṇidīkṣita, with the help of manuscripts available at various manuscript libraries, the French Institute of Pondicherry (IFP) which promotes and strengthens Indo-French scientific ties, will now increase the scope for Sanskrit researchers to pursue their research in the Sanskrit rhetorical field.