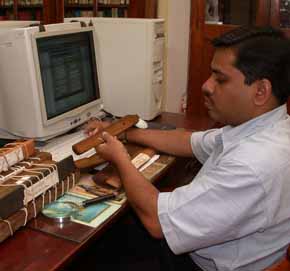 The French Institute of Pondicherry possesses an unique collection of 8300 palm-leaf Manuscripts mainly collected from many parts of Tamilnadu and from the southern parts of Karnataka. The major subject dealt with in these palm-leaf manuscripts are the Saiva texts (the Agama-s, commentaries, manuals, etc.), devotional hymns, sthalapurana-s (legends of many Saiva holy places), texts on Siddha medicines in Tamil, etc. Because of its richest collection of texts on Saivism, The Manuscript Collection has been included in the UNESCO Memory of the World Register in 2005 as THE SAIVA MANUSCRIPTS OF PONDICHERRY.

The descriptive catalogue envisages to give a very brief outline of various texts contained in the manuscripts, its special features, its importance, etc. with a view to introduce these vast textual resource to interested researchers and scholars.

Every text treated in the palm-leaf manuscript bundle is identified and the maximum details regarding its authorship, special features, the subject and importance are given in the form of very brief notes.

The entire collection of the palm-leaf and paper manuscripts has been digitised and is available on-line for the reference of scholars.