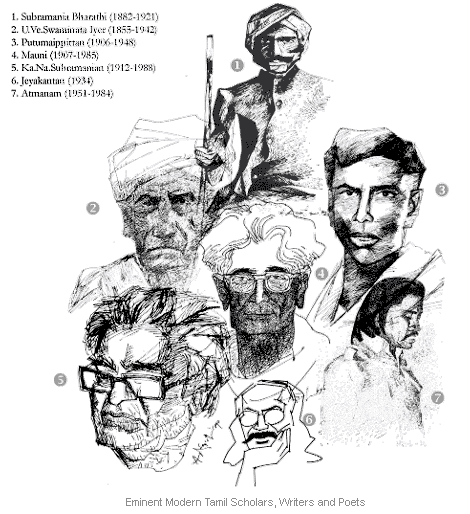 Tamil, one of the classical languages in India, is also an ever-evolving contemporary language practiced in more than three continents.

The IFP, situated in the heart of Tamil Nadu, has consistently developed over the last five years a small research unit on Contemporary Tamil studies with focus on the transition to modernity and internal evolution of Tamil society as reflected by original Tamil literary (or otherwise) sources. Our contribution in the field of contemporary cultural history of Tamil from late 19th to the 21st century has been:

Materials and Methods
The library is responsible for research documentation management. This is an ongoing activity and is aimed at setting up a specialized documentary centre for contemporary Tamil.

The collection of data, based on sources not available in any other libraries, is highly selective:

So far, more than 3000 books and 1500 journals have been made available to the public. Another batch of more than 2000 books and 1000 journals are being catalogued. For example, rare complete collections of Manikkoti (1933-1939) and Eluttu (1959-1971) are preserved here. Publications on CDROM are being considered.