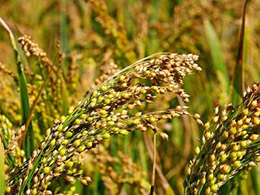 From mud to organics: the renewal of millets in southern India.

"We are only rednecks, we are told that we are eating mud ..." lamented a farmer in southern Karnataka in 1990, referring to the color of finger millet (ragi in the Kannada language) which represented the consumption in his village (Landy, 1994). Nearly three decades later, Indian middle-class stores sell ragi-flakes, ragi biscuits, or finger millet-based pasta and pizza doughs in packaging bragging the "the power of millets". Admittedly, these are niche products, still limited to an affluent social class; the surfaces growing finger millet (Eleusinecoracana) have not increased; production is being driven by increased productivity. But the trend remains clear: there is a spectacular rehabilitation of finger millet, and goes beyond to include other varieties of millets which had also been neglected during the Green Revolution.

In the context of my doctoral research I will evaluate four hypotheses which can be considered to explain this renewal:

The role of public policies

Wheat and rice were the first beneficiaries of the green revolution. Not only because improved varieties were soon available on the Indian market, but also because the state intervened to guarantee prices encouraging the modernization of cropping systems and machinery related to the processing of these commodities. Still today, the bulk of wheat or rice marketed in India is bought by the state from farmers to support prices. These grains are then redistributed and subsidized, to poor households through the Public Distribution System (PDS) (Landy, 2006). Millets were the forgotten cereals of such a policy, which refused to choose between support to the producer or to the consumer, but which had for consequence to privilege certain cultures and practices, and certain geographical regions. Thus the cultivated areas of millets declined.

A shift has taken place since the 2000s, with the limited entry of millets, including finger millet, into PDS machinery, as well as the encouragement of their cultivation in public agricultural extension centers and no in Karnataka State policy. On the one hand, we have become aware of the nutritional virtues of these cereals: finger millet is particularly rich in micronutrients (calcium, magnesium, iron, folic acid), and has a low glycemic index which responds to the triple burden of malnutrition which contemporary India faces. On the other hand, we want to promote more water-efficient farming systems than wheat and rice, with varieties more adapted to rainfall uncertainties - not to mention the adaptation to climate changes. At the confluence of health and agricultural policies, it will be necessary to test whether this new food policy (Timmer, 1983) corresponds to what Agrawal (2005), referring to Foucault, describes as "environmentality": a self-discipline of citizens generated by policies to raise awareness in different areas of the environment.

The role of consumer demand

In contemporary India, white rice and wheat are considered as the noble diet par excellence. Ragi balls were hard to find even in popular restaurants, even though farmers in southern Karnataka eat them at almost every meal. Today, they can be found in some 5-star hotels in Bangalore and recipes books based on finger millet are now published. However, India is experiencing a food transition (Poulain, 2017) which hardly follows the global model, mainly because of the maintenance of strong vegetarianism (Deaton, Drèze, 2009). Despite the rapid rise of obesity in urban India, does the rediscovery of finger millet mark the beginning of an awareness of diets? This could come from three very different types of knowledge. On the one hand, the "scientific" knowledge of the nutritional benefits of millets. On the other hand, the values ​​of Indian "traditional" medicine, based on ayurveda (Zimmermann, 1982). Finally, the care taken by a large part of the population to prevent the risk of "pollution" by food, whether it is prepared by castes lower than his own or that it contains "impure" elements. Our hypothesis is that the combination of these three perspectives could quickly reduce the current rise in nutritional imbalances and chronic diseases in India.

The role of organisations and companies

It will be a question of defining the civil society and private sector landscape which encourages the diffusion of milletswith regards to both production and to consumption. There are peasant movements and regional or national scale associations (Millet Network of India among others), sometimes linked to Western institutions, but also to more local associations, in particular women's groups, often major actresses in society and in the selection and conservation of seeds. The place of private companies will also be evaluated, as a variety of private entities are jumping at the growing urban demand for millets; what practices are they putting in place as these private companies take many forms. with contract farming which can generate a guaranteed income for farmers at the risk of dependence or even exploitation. A typology of actions and dominant discourses will be constructed, notably evaluating the importance of highly contrasted ideas: concern for food security, social and gendered approaches, ruralist and even Hindu identity movement, etc. To what extent can the diversity of these institutions be reconciled with the sustainable development of millets?

Farmers have typically produced millets for their family consumption, but also for the market when they can afford it. This cereal will be considered as one of the elements of complex cropping systems. Beyond the dominant discourses, a critical field approach will evaluate:

- to what extent are millets grown as single crops, or remain a component of complex systems and rotations. How and why do farmers decide which farming practices to put in place?

- to what extent are millets grown according to the agroecological principles (rainfed crops, traditional varieties, absence of chemical inputs ...); to what extent is it grown in irrigated fields, with improved seeds and mineral fertilizers.

Then it will be possible to assess the possible fragility of the growing finger millets within cropping systems, but also in activity systems (Cochet, 2011), an approach which takes into account non-agricultural income. High rural emigration in particular, can play an ambiguous role: reducing the available labor force, it can encourage the abandonment of many crops, including finger millet. Conversely, it can favor this cereal which requires less work than rice; and, in general, savings generated by emigration can be reinvested in agriculture.

Theoretically speaking, the study of the renewal of finger millet will allow to employmultiple frameworks:

- Social and spatial justice: does the renewal of the finger millet signify the rise of non-irrigated land, neglected until then by the green revolution? Can the poor peasant, who does not have the means to irrigate, find an additional income? Are we thus witnessing a triple revenge, forgotten lands, despised seeds, dominated peasants? Or does finger millet grow in irrigated land, either by canal or by drilling, already favored by conventional socio-technical systems?

- This critical approach is part of a questioning what could be described as political ecology (Robbins, 2012) - if at least we pretended that any rigorous geography was not political ecology without knowing it (Arnaud de Sartre, 2014 ), attached to the power relations between actors and the socially differentiated effects of processes and policies.

- This research can finally feed the questions considering technology as a "human science" (Haudricourt, 1987). Agricultural technologies will therefore be considered at the interface between globalization, politics and society (Scoones, 2006). If the green revolution has never been modern (Latour, 1991), is the growth of millets the sign of a conquering postmodernity, post-capitalism (Tsing, 2015) or more simply the index of the "emergence" of India, of its affluent social classes and a level entry into cultural globalization (Tawa Lama-Rewal, 2013)?

I am affiliated to the French Institute of Pondicherry (IFP) but first-hand research will take place in the neighboring state of Karnataka, where I will benefit from an important institutional and "field" anchorage: it will be a question of revisiting two terroirs, one irrigated and the other rain-fed, studied my thesis supervisor Frédéric Landy, to analyze changes in diets, cropping systems and activities, but also more generally the socio-economic, cultural and political recompositions which frame the evolution of the place of the finger millet. I will also work on neighbouring villages involved in the ATCHA program (ANR 2016-2020) on the adaptation of irrigated agriculture to climate change (http://www.agence-nationale-recherche.fr/Projet-ANR- 16-CE03-0006). Research on associations will focus on the cities of Mysore and Bangalore, and will benefit from the network built by the French Institute of Pondicherry, which has recently been reinforced by the response to the Indo-European call for projects EQUIP (project AGROECO Advancing Agroecology in India and Europe for Sustainable Development and Equity).

My supervisor, Frédéric Landy, is the director of IFP.

The PI of the AGROECO project, Hélène Guétat-Bernard, is the head of IFP's Social Sciences Department.