Online International Workshop “Inside and outside ‘ordinary city’ margins” IFP

Loraine Kennedy co-hosted with Karen Coelho, Madras Institute of Development Studies (MIDS), an online international workshop, “Inside and outside ‘ordinary city’ margins”, on January 27th, 2022. It was co-organized by Urban Studies Foundation (USF) and MIDS, Chennai. This virtual workshop brought four USF International Fellows together to exchange their research and engage with India-based urban scholars. It also provided an opportunity for a group of young Fellows from the Writing Urban India initiative, supported by the USF, to share their work in an international setting. Grounded in ‘ordinary cities’ of the global South, in Brazil, India, Nigeria, and the Philippines, the research conducted by this group of International Fellows critically engages with the notion of urban boundaries and their attendant questions of sovereignty, social justice and marginalization.

The annual Local Food System workshop was held in March on Food and Diversity. The program was inaugurated by the Honorable Minister for Agriculture of Puducherry and the Vice Consul General of France. It began with a Photo exhibition for school children on “My Kitchen and My Food”. Two booklets have been launched on Leafy Greens, and on Native Bees and Pollination (cf. publications), with Bureau du Livre’s support (IFI). Two research programmes, PATAMIL on food justice and democracy and POLLIN project outcomes were presented to the stakeholders. Presentations have been done on culture and history of street food in Puducherry and on Midday meals in schools during the COVID lockdown. Two field works were held in villages. The women organic farmers showcase the traditional food varieties and its nutrition values to the public. INDP Manager Augustin Brutus organised a roundtable and debate on “My food, my State” among the practitioners and youth groups. Organic farmers organized a farmers market and roundtable with farmers-consumers and researchers. Since July, the IFP has organised a monthly seminar with civil society and farmers on food and agricultural issues.

What is an archive in India and Europe? (2nd edition)

The second edition in the series of conferences on the theme ‘‘What is an archive in India and Europe?’’ was held at the Indian Institute of Technology, Chennai on April 6 - 8, 2022 co-organised by the International Research Network Archives of International Theory, coordinated by Benedetta Zaccarello (ITEM, CNRS/ENS), IFP and the IIT. In the second edition, this international conference under the title “Archiving the Contemporary: Memory, Technology, and People'' brought together archivists and researchers from human and social sciences from India and Europe to reveal the complex and living nature of the archive and discussed how to preserve and represent contemporary memory, technology and people in archives, and how to retrieve them. Three presentations made from the institute highlighting the diverse nature of the collections here and the efforts which are being made now to preserve them. The third conference in this series is expected to take place in 2023 in Kolkata, in collaboration with the School for Cultural Texts and Records at the Jadavpur University and its Department of Philosophy. “What is an archive in India and Europe?” is part of the research activities of the AITIA IRN network. This series of conferences has given rise to a new impetus to the archival instinct leading to preservation efforts in many institutions in India including the host institutions, IFP and IIT, Chennai. 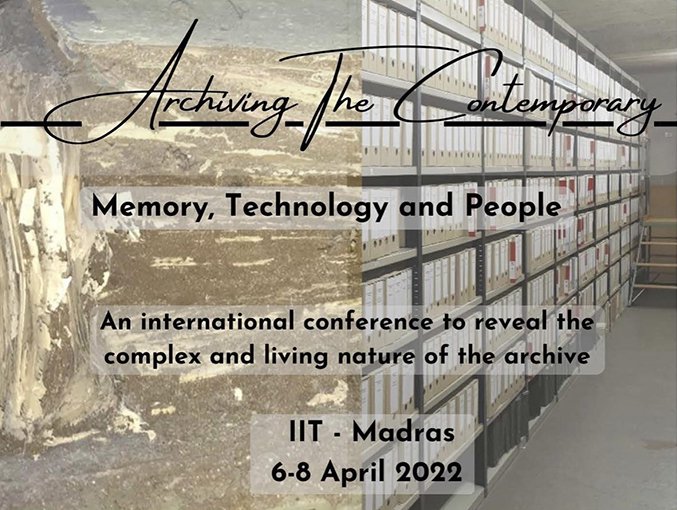 On April 21st, 2022, Isabelle Guérin, associated researcher at IFP, and Venkatasubramanian, IFP, organized a workshop at IFP on the concept of "political work", defined as the set of activities and negotiations that citizens perform on a daily basis to access their rights and welfare programs. Feminist research has broadened the narrow definition of work by arguing for the recognition of domestic work and care work, mainly performed by women, and in the first place by subaltern women. In contemporary societies, and in India in particular, women perform another form of unpaid and invisibilized work. The aim of this work was to ensure that the social state fulfills its basic functions, whether it be the provision of social transfers or basic rights. Drawing on the recent book of Prof. Kaveri Haritas (Global Jindal University) and the work of Kalpana Kanukanaran (IIT-Chennai), this workshop aimed to discuss this concept, its definition, boundaries and implications.

Art, Politics and the Idea of Community: Sri Lankan and Indian Perspectives

In collaboration with the Sociology Department, Goldsmiths College, London, the Social Sciences Department of the IFP organized a workshop on the theme “Art, politics and the idea of community”, dealing with questions such as: What does it mean to speak of ‘communities’? What do we assume when we speak of democracy? And what is its relationship to practices of critique? What do we mean when we speak of ‘traditional arts’ and ‘ritual’? What do we mean by ‘building’ critical democratic communities? Scholars, activists, publishers, artists, journalists and writers from India and Sri Lanka participated in the workshop. This workshop platform provided a forum for sharing thoughts and perspectives about migration, Dalit issues, and the challenges faced by the people trying to chart their ways through the complexity of the present scenario. As a part of the workshop an installation titled “Mothers” by the Sri Lankan Tamil artist Nirmalavasan was exhibited at the IFP. 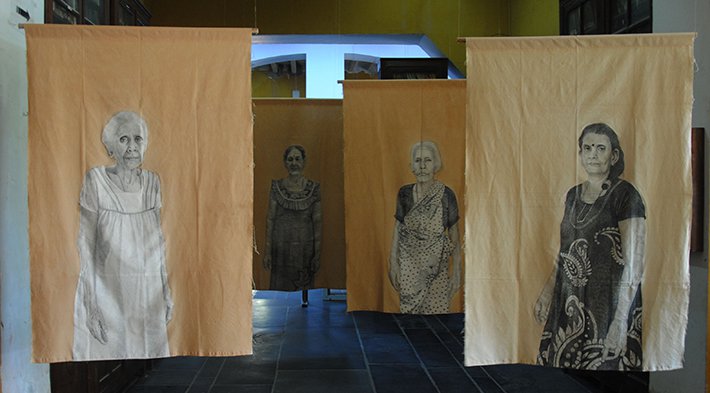 At the École française d'Extrême-Orient EFEO

A hybrid two-day workshop, organised by Indra Manuel, was held in honour of Prof. K. Nachimuthu, to commemorate his seventy-fifth birthday, at the EFEO Centre in Pondicherry on 29th and 30th August. Twenty-one contributors — from the universities of Chicago, Hamburg, Heidelberg and Naples, the UK’s Open University, and of course from Pondicherry —delivered papers. The subjects were chosen to reflect Prof. Nachimuthu’s broad range of interests over the years, notably grammar, linguistics, poetics, and South Indian cultural and religious history.

This hybrid workshop focused on the production and uses of categories in research. It fostered a dialogue between young researchers involved in South Asian studies across five countries—namely India, France, the UK, Australia, and Singapore. 18 Master's and PhD students presented a paper on their work, 6 professors discussed them and approximately 50 people attended the workshop every day and took part in the collective discussions.

Democracy beyond elections: A critical survey

This joint seminar, co-organised by Laurence Gautier (CSH), Jean-Thomas Martelli (CSH), Rahul Verma (Centre for Policy Research - CPR) and Hilal Ahmed (Centre for the Study of Developing Studies - CSDS), took place at the CPR on August 29, 2022. Participants discussed the role of non-party actors in India’s democracy. This included actors ranging from NGOs, student and farmers’ groups to caste associations, trade unions, political consultants and social media groups. Scholars examined their modes of mobilisation as well as the conceptions of democracy that these actors put forward to see if they contribute, or not, to alternative definitions of democracy beyond elections.