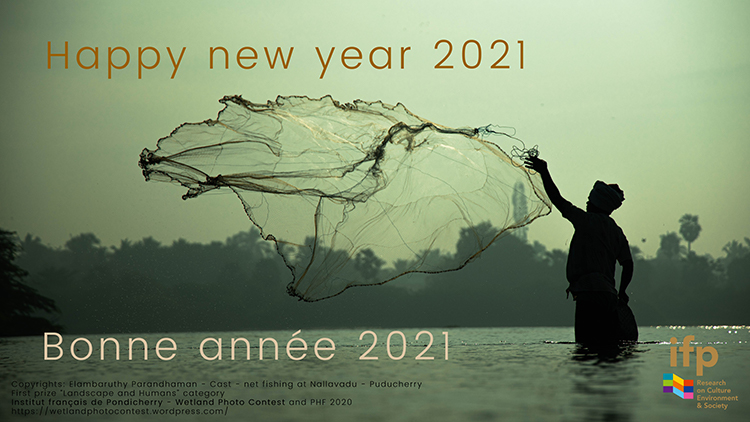 This new edition of Pattrika coincides with a certain resumption of research activities, which, although they never ceased, had taken on more isolated forms, oriented towards reading and writing. In the last few weeks, field work has been able to resume, cautiously, while respecting strict sanitary protocols that sometimes complicate interactions. It is to be hoped that our work can get back to "normal" quickly, but the uncertainty is likely to continue for some time. Furthermore, while researchers from our institutions have been able to return to this essential work of collecting information and observing and analysing in situ, this is not the case for our colleagues abroad, in France or elsewhere, whose institutions do not allow them to undertake missions.

The IFP researchers from the Social Sciences Department (Venkatasubramanian, Hélène Guetat-Bernard) and the Ecology Department. – K.Anupama, N. Balachandran, S. Prasad, J. Lazar) together with colleagues from INRAE (Adam Vanbergen), MNHN (Emmanuelle Porcher, Colin Fontaine), CNRS (Elisa Thébault), IRD (Romain Simenel), The University of Nanterre (Frédéric Landy) and Science Po (Nicola Gallai) will work for one year on a pilot project funded by the Mission for Interdisciplinarity of the CNRS (MITI) in the framework of the POLLIN project (Pollinator protection and agro-ecological transition in a territory of South-East India).

A Sixteenth-century Tamil Translation of the Sanskrit Śivadharmottara EFEO

An important dimension of the Śivadharma project (ERC grant n° 803624) headed by Florinda De Simini (“L’Orientale”, Naples) is the study of the localised diffusion of the ideas and practices of the lay Śaiva religion preached in the Śivadharma corpus. So while some scholars in Pondicherry are editing the Sanskrit text of some parts of the corpus — notably chapters of the C7th Śivadharmottara (R. Sathyanarayanan, Dominic Goodall) and an undated Sanskrit commentary (S.A.S. Sarma) — others are focussing on a C16th translation into Tamil, the Civatarumottaram, by Maṟaiñānacampantar, or Vedajñāna I (d. 1563 CE), and on its echoes through later Tamil literature.

Since December 2020 Dr. Tista Kundu, under the supervision of Prof. Nicolas Gravel, commenced a project titled "Doomed since birth? The role of predestined social backgrounds in measuring well-being in India'', funded by the AXA Research Fund Post-Doctoral Fellowship. The central topic of the research project is to evaluate the extent of inequality of opportunity as an alternative measurement of well-being in India that prioritizes the assessment of inequality generated from factors beyond individual control (like caste, race, sex, parental backgrounds). The philosophy behind this research theme is to provide a level playing field for everyone in the society irrespective of their caste, creed or color.

The increasing trend of anthropogenic impacts and changes in the monsoon patterns demand monitoring studies of biodiversity at a relatively quicker and broader scale. Recent advancements in remote sensing data and technology has emerged as a strong tool by providing continuous information to assess biodiversity and monitor vegetation phenomenon like phenology at the regional scale.

The Haṭha Yoga Project draws to a close EFEO

The ERC-funded Hatha Yoga Project (HYP, grant n°616393) has charted the history of physical yoga practice through texts, visual culture and ethnography. Based at SOAS University of London and running from 2015–2021, the HYP has employed several researchers at the EFEO in Pondicherry, and its major outputs will be published in the Collection Indologie series of the IFP and EFEO.

As part of the DHARMA project (ERC grant agreement N° 809994), Dominic Goodall meets up online with other members of Task-Force C (Kunthea Chhom, Chhunteng Hun and Chloé Chollet) along with Prof. Diwakar Acharya (University of Oxford) and Dr. Nina Mirnig (Austrian Academy of Sciences, Vienna) on Wednesday mornings (European time) to study Sanskrit inscriptions from Nepal (especially from the 5th–7th centuries CE) and Cambodia (from both the pre-Angkorian and Angkorian periods). During these meetings, both published and unpublished epigraphic materials are reviewed.

The project, Survey on the Housing Market is a fieldwork-based study to understand the housing price dynamics in the metropolitan city of Delhi using hedonic practices. The project aims to construct a data set on the prices (purchase or rent) and the characteristics (size, number of rooms, comfort, location) representative of the diverse housing infrastructure of Delhi. The sampling was chosen in 2005 and 2006 based on two parameters: spatial dispersion and the categorical distribution of the households, characteristic of the three segments of the heterogeneous housing market of Delhi. They are authorized and unauthorized slums, urban villages, Delhi Development Authority (DDA) housing to private houses.

After weeks of delay due to the COVID-19 pandemic, NEEMSIS 2 (Networks, Employment, dEbts, Mobility, and Skills in India Survey) has started its fieldwork at the end of October 2020. NEEMSIS 2 is the third wave of longitudinal data mainly collected in ten villages of Villupuram and Cuddalore districts at the household and individual levels., and is part of the LAKSMI (“Labour, Skills, Social Networks, and Mobilities in India”) and the “Labour, Finance and Social Dynamics” programmes of the Axis “Labour” within the Social Sciences Department of the IFP.

Blandine Ripert assumed the position as the new Directress of IFP in the month of September 2020. Coming from the Center for South Asian Studies (CNRS-EHESS in Paris), Dr. Ripert is an ethno-geographer and her research focuses on contemporary dynamics in Nepal and India, which she addresses from a spatial, social, cultural, political and religious point of view. At IFP, she is keen towards working on the enhancement of rich collections (photo library, manuscripts, books, herbarium, pollens, archives, maps, socio-economic data and geo-referenced data), ensuring their conservation and making them more accessible.

Julien Andrieu joined as the new head of the GeoSMIT Department in November 2020. He was an assistant professor (Maître de conference – HDR) in geography at Université Côte d’Azur in Nice (south-east) and belongs to the research unit UMR ESPACE (CNRS). His teaching and research concern the geography of terrestrial and coastal vegetation with a focus on spatial analysis methodology (remote sensing, GIS, spatial modelling).

Bharat Sundararajan joined the IFP as an archivist in October 2020, and his arrival marks a new stage in the preservation and promotion of the IFP collections.

M. Ramesh benefitted from a local scholarship of 3 months, thanks to the Tourism Department of Pondicherry, from October to December 2020, at the Pondicherry Centre of the EFEO, to work on preparing photographs and material to elucidate the history of the archeological site of Arikamedu.

Bérénice Girard, as a post-doctoral researcher, she has been working extensively on the question of energy in the Indian cities.

Christine Moliner, as an associate researcher, she is also an associate professor at Jindal specialized in Sikh diaspora.

Hugo Ribadeau-Dumas, as a doctoral student, doing his PhD from the EHESS (Paris) under Stéphanie Tawa Lama-Rewal, he is working on urban dynamics and gender in India.

Prof. Frederic landy who served the IFP as a Director from 2016 left the Institute on 31st August 2020

Christophe Jalil Nordman, Researcher at the Department of Social Sciences left the institute at the end of July 2020

Anne Casile, Researcher at the Department of Social Sciences left the institute at the end of July 2020

Dr. Priyanka Avula and R. Ramya, who worked with us in the ERC project “The Hatha Yoga Project: Mapping Indian and Transnational Traditions of Physical Yoga through Philology and Ethnography - HYP Grant N° 647963)” led by Jim Mallinson (SOAS ) left us in September 2020 when the project ended. Since she joined us in July 2019, Priyanka helped in particular with the identification and transcription of unpublished works on yoga from manuscripts in South Indian scriptures. R. Ramya, who began working with us in June 2017 specialised in typing Sanskrit Yoga texts into Devanagiri or Roman script.

Olivier Telle, health geographer and former head of the Territorial Dynamics research department of the CSH has completed his CNRS affectation with the CSH after a 4 years term. He remains an associate-member of the CSH, while still being a visiting fellow at the CPR Delhi and joining back the Géographies-Cité UMR in Paris.

Can Landscape Empower Rural “Minorities” Through Tourism? Eco-Ethnicity in the Highlands of India, Nepal, China, Laos and Vietnam.