Launch of the book Pondicherry: a social and political history 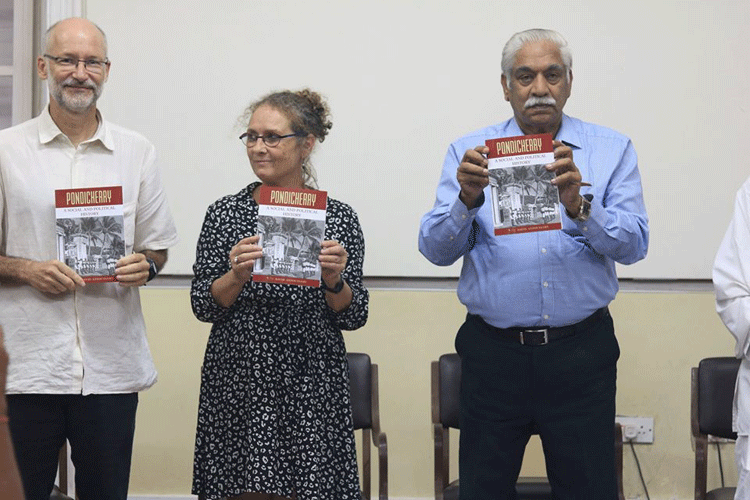 On 7th February 2020, a book launch was organized at the French Institute of Pondicherry for the publication Pondicherry: a social and political history by David Annoussamy (IFP, 2020). The book was released in the presence of Mme Carole Josse, the Deputy Consul of France in Pondicherry and Dr. V. Nallam, Honorary President of the Historical Society of Pondicherry. It was well attended by citizens of Pondicherry and history enthusiasts. An eager audience had the opportunity to listen to the author present his book and recount some of his experiences of life in Pondicherry.

The EAP810 collection is now online

(The Endangered Archives Programme (EAP) is supported by Arcadia, a charitable fund of Lisbet Rausing and Peter Baldwin)

This project, carried out in collaboration with the CTMR, aimed at digitising and preserving manuscripts related to siddha medicine and knowledge including religious and philosophical, alchemical and magical aspects. It comprises around 300 hundred palm leaf manuscripts that were produced between the 18th and the beginning of the 20th century, and are either copies of texts authored by cittarkaḷ (class of yogis of the siddha tradition) or anonymous texts. The manuscripts have been collected in Kannniyakumari district (150) and in some southern districts such as Pudukottai, Trichirapalli, Tanjavur, Theni and Tirunelveli, from siddha practitioners, traditional as well as institutional, siddha practitioners’ descendants and private individuals who collected them for their own interest or for preservation.

This collection is of interest to siddha practitioners, and to researchers in history, medical anthropology and Tamil studies, as well as in medicine and pharmacology.

Link to the collection: https://eap.bl.uk/project/EAP810/search