IFP in SpotlightA four-day workshop on the local food systems of Puducherry, food sovereignty and the agro-ecology transition, hosted by the French Institute of Pondicherry (IFP) in association with the Department of Agriculture was held from January 22-25, 2020. The objective of the event was to organise a collaborative network that integrates sustainable food production, processing, distribution, consumption in order to enhance the environmental, economic, and social health of Pondicherry.

Mr. R. Kamalakannan, Agriculture Minister for Puducherry, inaugurated the workshop and said farmers engaged in organic forms of cultivation were at the forefront of a bottom-up transition to healthy foods. As part of the workshop field visits to organic farms were conducted followed by an organic food exhibition. 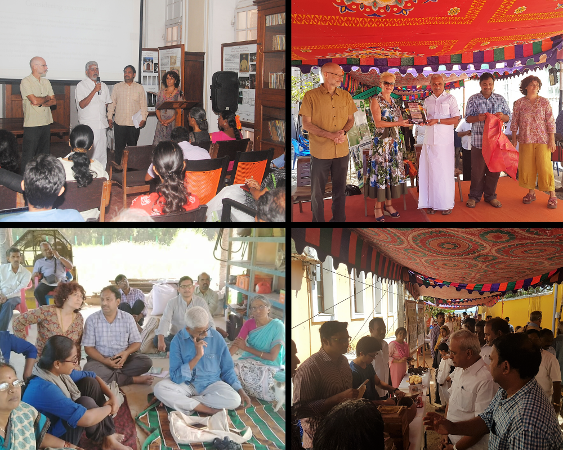 Snapshots from the workshop "Local food system of Pondicherry: A discussion on food sovereignty and agro-ecology transition" on organised by the French Institute of Pondicherry in collaboration with the Agricultural Department of Pondicherry from January 22-25, 2020

The organic food exhibition was inaugurated by the Member of Parliament (Lok Sabha) V Vaithilingam on January 25,2020 on the open space adjacent to the institute. The purpose of the food exhibition highlighting organic food is to generate awareness in changing practices.

Thanks to the energy and enthusiasm generated by the 2020 edition, several follow up actions involving the cross section of academia, farmers and consumers (broadly) are planned during 2020 to help further develop this theme in the next edition in 2021: considering the diversity of players this includes, research and outreach and to facilitate this a broad umbrella network சார்பு (SaArPu) has been established to coordinate the ensuing intersection and interactions between society , science and the living world (earth).

(சார்பு means dependence/ interdependence) and here it is taken to indicate the same between Society, Science , Earth.

As part of the fifth Pondicherry Heritage Festival 2020 and World Wetlands Day 2020, a free photographic competition has been organized by the French Institute of Pondicherry, open to all, on the theme of Wetlands and Climate Change in Tamil Nadu and Puducherry Union Territory. It aims to raise public awareness of the rich cultural and natural heritage values of regional wetlands. The Inaugural Function and award ceremony of the WETLAND PHOTO CONTEST 2020 was held on February 2, 2020 at 11:00 A.M at the French Institute of Pondicherry (IFP), 11, Saint Louis Street.

Shri. M. KANDASAMY, Hon'ble Minister for Science, Technology and Environment, Government of Puducherry inaugurated the function and handovered the prizes for the winners of the Photo contest. 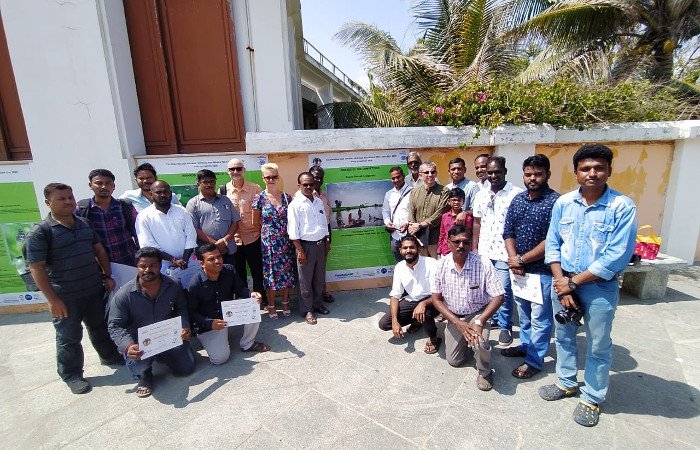 Seminar on Gender analysis of Development Studies: A French-Indian dialogue from social sciences and humanities

This seminar entitled “Gendered Analysis of Development Studies” was organized by the French Institute of Pondicherry, social sciences department and Pondicherry University, Department of Women studies and Department of French. The aim of the seminar was to deliberate on women, gender and their matters related to the Indian development model and its effects on particular issues of rural and urban dynamics/private and public spaces, agriculture/food/biodiversity/relationship to nature and common goods, inequality/poverty/labour relations/migration/diaspora, political participation/empowerment, etc. through a multi- and interdisciplinary approach.

The session 2 of the seminar titled Gender and labour: a comparison from agriculture and fishing context was held on February 11, 2020 focussing on “Migration for capital accumulation: Changing class and gender dynamics among small-scale fishers on the Coromandel coast, Tamil Nadu”.

In the face of growing competition for limited open access resources, and consequently, a rapid capitalization of fisheries, this paper explores the processes of negotiation and renegotiation of both gender and class identities, and their intersections, within fisher communities and its impacts on gendered vulnerabilities and well-being. Based on data collected from a survey of 200 households and in-depth interviews with about 20 households in Cuddalore District in Tamil Nadu, India, it points to visible differentiation, with those who are able to invest reaping benefits and others being reduced to a labouring class. A number of young men from fishing communities migrate to raise capital for investment in boats and related technologies in order to retain their status as fishers rather than labourers.

For other events of the IFP, please visit the website 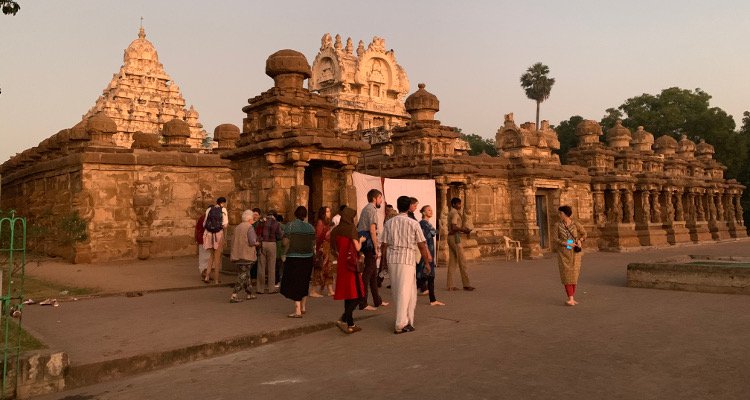 Visiting the Kancheepuram with the participants of the workshop

The first is a workshop titled “Networks of Temples and Networks of Texts in South India”, which was organized by Ute Hüsken and Jonas Buchholz, both of the University of Heidelberg, from January 20 to 26, 2020. This workshop, organized in as part of the “Temple Networks in Early Modern South India” project funded by the German Research Foundation (DFG), aimed to explore temple networks in South India through their representation in Sanskrit and Tamil texts, in iconography, and architecture, with particular focus on the city of Kancipuram, where different Hindu traditions—Śaivism, Vaiṣṇavism, and Śāktism—have not only coexisted, but also interacted and competed for centuries. 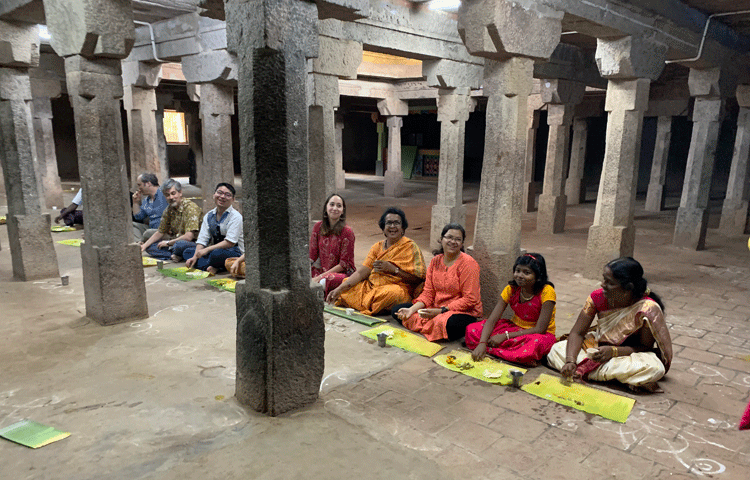 As part of the Śivadharma Project (“Translocal Identities: The Śivadharma and the Making of Regional Religious Traditions in Premodern South Asia”) a 5-year ERC Starting Grant Project (2018-2023, grant agreement n° 803624) headed by Florinda De Simini (University of Naples “L’Orientale”), the first reading workshop was held at the Pondicherry Centre of the EFEO from 28 January to 7 February 2020. Passages from the various editions underway of Sanskrit works belonging or related to the Śivadharma corpus were read through and discussed, as well as passages from a Tamil translation of the Śivadharmottara produced in the sixteenth century, and from other Tamil works that incorporate paraphrases of works of the corpus.

From February 10 to March 6, 2020, the Pondicherry Centre of the EFEO hosted the “18th Classical Tamil Winter Seminar”, dedicated to the reading of the Puṟanāṉūṟu, organized by Eva Wilden (University of Hamburg). The workshop consisted of a month of intensive reading of the Puṟanāṉūṟu, from the draft critical edition of Professor G. Vijayavenugopal, which is based on a collation of the editions and of 15 manuscripts. The primary goal was to assess the evidence and develop and discuss strategies for establishing what ought to be the main text, all the while furthering the understanding of the way another important old anonymous commentator argues, and in particular how he treats semantics and “historical” detail.

This seminar, hosted by the CSH and animated by Julien Levesque from the Politics & Society department welcomed the famous Indian sociologist Dipankar Gupta. The topic of the actual economic trends in rural and urban India, as well as the rural exodus phenomenon, and the linkages between education, jobs and skills in contemporary India were at the center of the debates following Prof. Gupta’s presentation. He also introduced us some detailed data from national offices to illustrate those ongoing tendencies.

Social Scientists in the Civic Space 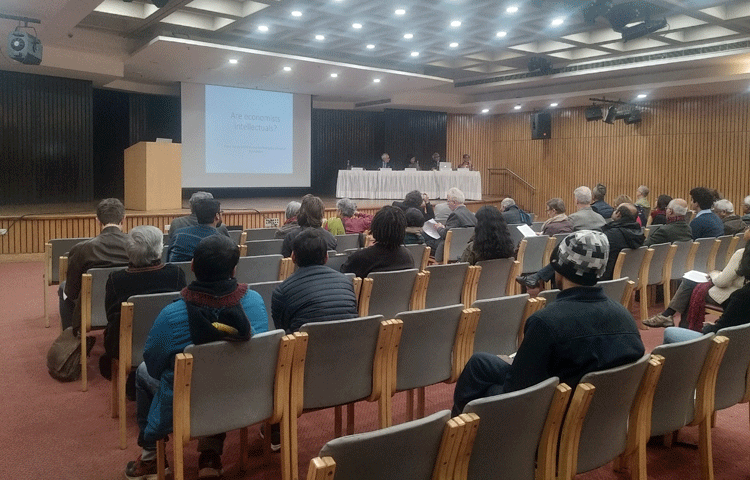 Based on the discussions inaugurated by Max Weber or Norbert Elias, the conference “Social Scientists in the Civic Space” debated the impact of big contemporary issues such as migration, health, economic development, big data, demography, gender etc. on research in the social sciences. It explored their epistemological and ethical implications and discussed the diverse modes of interventions of social scientists in public debates and civic spaces. The two-day conference did contribute to an ongoing dialogue between French and Indian scholars.

Please find the abstracts for the various talks and the biographies of the speakers.

Screening of “The City of Waste” 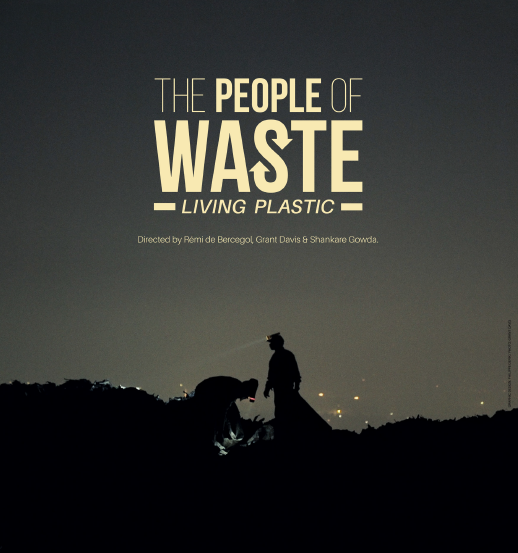 What happens to our garbage after it is dumped? Through the example of Delhi, the film explores the transformation of a piece of plastic waste into a resource, through filmed interviews with diverse “people of waste” living in the shadow of consumer society. It aims at making visible the myriad of professions that specialize in the collection, sorting, reselling, cleaning, shredding and transformation of waste, from the stigmatized garbage picker at the bottom of the chain until the industrialist at the top of the pyramid who re-injects the recovered materials into the formal economy. Beyond the Indian case, it reminds the spectators of their responsibility as a producer of waste and their relation with this waste recovery system, putting into question the ambivalent discourses on recycling which tend to legitimize an endless mass consumption.

“Swachh Bharat ke Nayak” series: the screening is part of a broader 2020 event in India supported by the French Institute that intends to engage toward a reflexive approach on the heroes of clean India.

This seminar was conceived as a platform for conversation between historians, other scholars, and public figures who are prepared to reflect on the role of history in contemporary arenas and markets of ideas, opinions, and fabrications. This session, animated by Ines Zupanov (CSH) and Laurence Gauthier (O.P. Jindal Global University) welcomed the very renowned Indian historian Romila Thapar.

Screening of “Princes and Vagabonds” by Fabienne Le Houerou (CNRS) 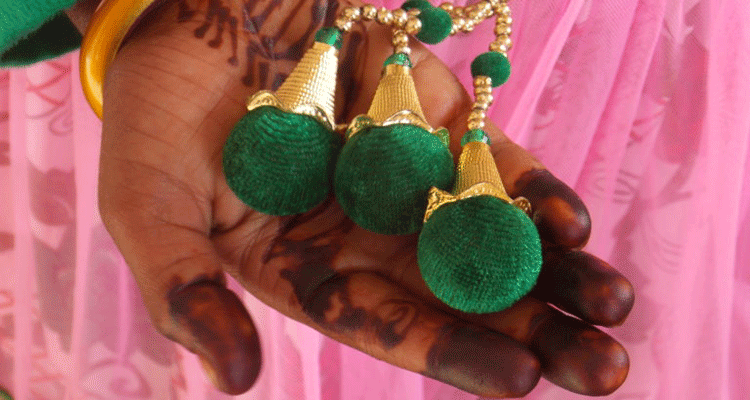 “We are in Rajasthan, in the Thar desert 30 kilometers away from the Pakistan border. The Thar desert is one of the most populated deserts in the world. Small villages are spread all over the arid immensity. The Manganiars are the sons of this landscape. They form a cast of Sufi musicians since their Islamization during the Moghol Empire (16th century). They are considered as a low cast in Rajasthan, despite their incredible musical talent.

They live in Jaisalmer and in the desert. We will tell their everyday struggle and their continuous survival strategies through their music and migrations in the desert where they are performing. We will follow them inside their families, and expose their incredible poetic spirituality through an investigation into their music. Their international migrations in a globalized world will also be evoked in the documentary.”

The screening was followed by a discussion and Q&A session between the filmmaker and the audience, animated by Julien Levesque (head of the Politics & Society research area at CSH).