The French Institute of Pondicherry (IFP), UMIFRE 21 CNRS-MEAE, is a research institution under the joint supervision of the French Ministry of Foreign Affairs and the French National Centre for Scientific Research (CNRS). It is the largest of the 26 research centres under these umbrellas. It is also part of the Research Unit USR 3330 “Savoirs et Mondes Indiens” of the CNRS, along with the Centre de Sciences Humaines (CSH) in New Delhi. 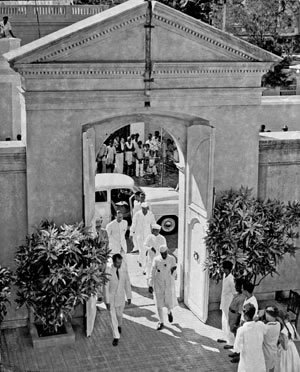 Visit of the Prime Minister Jawaharlal Nehru in 1955

Established under the terms of the Treaty of Cession of French Territories in India, the French Institute of Pondicherry was inaugurated on 20 March 1955. It was initially engaged, under the leadership of its first director (Jean Filliozat), in the study of Indian civilization and culture, and more particularly in the history and the religions of South India.

In the 1960s, taking over a first research cell created at the origin of the Institute, a Department of Ecology was created to collect information on the conditions and evolution of the environment in South India (vegetation, soil, climate change, etc.) with its focus on the Western Ghats, one of the world’s 34 hotspots for biodiversity.

With the setting up of the department of Social Sciences in 1988, the Institute also extended its interest to the evolution and dynamics of Indian society.

The development of research and the necessity to support it with modern methodologies and equipment led to the creation of a Laboratory of Geomatics (LIAG) in the 1990s, later named Department of Geomatics in 2022. With it, the Institute acquired modern tools for the representation and analysis of the relationships in space and time between these entities and their environment. The installation of the Geomatics as a common tool greatly helped in identifying new areas for research.

The IFP also has a multidisciplinary library. This Centre holds specialized data of the research conducted at the IFP, which is augmented every year through a dynamic acquisition policy. With about 70,000 books, the library is open to the public within a set of rules framed by the IFP.

In terms of Article 24 of the Treaty of Cession of French Territories in India (1956) the mission of the IFP is to function as an establishment for higher studies and research.

A tool of the French scientific diplomacy, the Institute is reinforcing the Indo-French partnership by its research and training missions. Through its research projects in South Asia, it contributes to making vibrant the cultural and natural heritage of India.

IFP's permanent exhibition presents its main activities, some of its research projects and the IT applications and portals it has built in a form suitable for the general public. Posters, samples of its collections (manuscript on palm leaf, herbarium...), scientific short films are presented on the first floor of the small colonial palace. From there, visitors can go to the terrace and enjoy a panoramic view of the sea.

The library of the IFP is a multi-disciplinary research library. Started with the founding of the Institute in 1955, its collection was constituted over the years with the active collaboration of the IFP’s researchers. Today the library has a rich and varied collection relating to the the domains of Indology, Social Sciences and Ecology. Its research interests cover India, and more generally South Asia. As of today, the collection consists of 67 000 books, 380 theses, over 1600 articles, 440 reports and 820 journals of which 144 are received currently. Over 800 books are added to the collection every year. [Read More]

On a utilizable area of 3,000 m2 divided between a building dating from the late 18th century, which was recently renovated, and a wing constructed in 2002-2003, the Institute avails of: 26 offices; three laboratories (informatics, palynology, botany); two herbaria; one reading room with 30 seats; two conference rooms with 40 and 70 seats; various rooms for the storage of fragile collections (manuscripts, photos…) and one map library; one photographic laboratory; one exhibition hall and five guest rooms. For more details on tariffs click here

The IFP, a research institute, is accessible to all for visits: Permanent exhibition and Library. Public visiting time - 9 a.m. to 5:30 p.m. Organisation of events and conferences (scientific /corporate) are subject to conditions. Please contact ifpcom@ifpindia.org