Ruined and torn:TN tries to recapture charm of studio photography 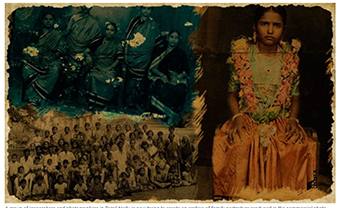 A group of researchers and photographers in Tamil Nadu is now tying to create an archive of family portraiture produced in the commercial photo studios since their appearance in the second half of the 19th century.

Until the digital age dawned and pouts and ostensible ear-to-ear smiles became the norm for photographs, families would once in a while dress up in their fineries with oodles of talcum powder on their faces, mount rickshaws, or Ambassador cars, depending on who could afford what, and head to the nearest photo studio.

They would then follow the photographer's instructions and take positions against walls painted blue or pink to serve as bright backgrounds.

Irrespective of whether the photographer said "smile" or not, most posers just looked at the camera. If the camera has scaled up on technology since, people have scaled up on their posing skills. But the quintessential photo studio has not been able to survive the digital tsunami.

So what happened to our old still photography studios believed to have started in 1855 with the arrival of the camera officially in India?

To find answers, a team of historians and photographers comprising eight members began a preliminary survey in 2015.The project documented the history of Tamil studio photography from 1880 to 1980.

Called Studies in Tamil Studio Archives and Society (STARS),the aim of the project,funded by the British Library under its Endangered Archives Programme, was to explore the feasibility,scope and extent of creating an archive of family portraiture produced in the commercial photo studios of Tamil Nadu,since their appearance in the second half of the 19th century and up to the introduction of mechanised processing of negatives and prints in the 1980s.