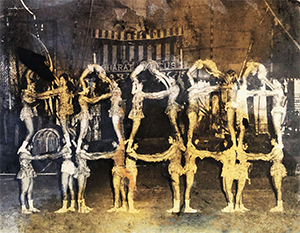 The aesthetic, professional and mnemonic lives of India’s circuses

Due to its cosmopolitan origin, its itinerant nature, its modernist, yet ever-nostalgic aesthetic, the circus occupies a marginalized and ambivalent position in the field of Indian performing arts, ever since the profession’s early days on the subcontinent in the 1840s. While this position is arguably a feature of big-top circuses worldwide, the Indian circus has enduringly been cast as  “foreign” and anachronistic in Indian society, given the challenges it posed to the longstanding influence of caste and religion on the structuring of professional milieus, as well as the religious and state-sanctioned forms of inter-species cooperation. Building on over 15 months of ethnographic and archival engagement with the professional community that sustains this industry, I argue that the identity and recognizability of the circus as a cultural form owes to the conjunction of three distinct temporalities respectively tied to (1) the uptake and innovation of an imported entertainment form and its local development over almost 180 years; (2) the constitution of the circus as an Indian industry, through interactions and competitions among circus owners; (3) the construction of mnemonic narratives and biographical accounts around circus-related experiences by members of the circus community. I argue that it is through conflations of aesthetic, professional and biographical temporal horizons that the seemingly unchanging cultural identity of the circus as a “dying art” emerges in India.

The circus’ uncertain projection of time, and its conversion into nostalgia as an element of the show, makes it an ideal site for symbolic investments. The exceptional and open-ended quality of the circus’ public image has repeatedly been seized by external actors who have used it (as a site for governmental and diplomatic representation since the 1860s; an exotic set for India’s film industries since the 1950s; or as a site of abuse used by NGOs defending the rights of children and animals since the 1990s) to bolster their own moral and political scenarios and messages.  My dissertation gives perspective on this atypical yet structuring role of the circus in Indian society, and attempts to give a better understanding of professional collective memory and of the multiple temporal scales at which the lives of aesthetic forms unfold.

Eléonore Rimbault is a PhD candidate in anthropology at the University of Chicago. Her dissertation is an ethnographic and archival study of the social and temporalizing practices that make the circus an enduring cultural form in India. Several of her translations have been published in HAU: Journal of Ethnographic Theory.