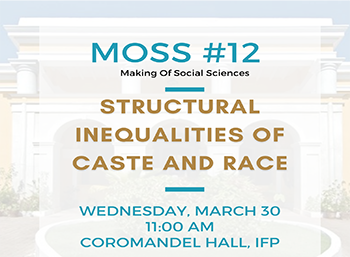 MoSS#12 [Making of Social Sciences] will take place on Wednesday, 30th March 2021 at 11:00 am at the French Institute of Pondicherry – Coromandel room. You will find below the abstract by David Picherit :

We will have the pleasure to welcome Dr. A. Kalaiyarasan, economist, Assistant Professor at the Madras Institute of Development Studies, Chennai, and a non-resident fellow at the Watson Institute for International and Public Affairs, Brown University, U.S.

Structural Inequalities of Caste and Race

In this project, moving beyond the conventional political economy tradition, I look at ideologies of "color blindness" in the US and "castelessness" in India that legitimize inequality. Drawing on large-scale economic census data in India (50 million entries), and on the American Business Survey in the US, I compare caste and racial inequalities in ownership, access to finance, and sectoral concentration, specifically among groups that have managed to attain relatively higher access to capital. The project also draws on my fieldwork among racial minority entrepreneurs in Philadelphia and Dalit and lower caste entrepreneurs in Tamil Nadu.

A. Kalaiyarasan is an Assistant Professor at the Madras Institute of Development Studies, Chennai, India, and a non-resident fellow at the Watson Institute for International and Public Affairs, Brown University. He was previously with the National Institute of Labour Economics Research and Development, a research wing of NITI Aayog (Planning Commission), Government of India. He received his Ph.D. in Economics from Jawaharlal Nehru University, New Delhi, India. His academic interest lies in structural inequalities of caste and race and regional political economy. He regularly contributes to The Hindu and The Indian Express. His recent publications are The Dravidian Model: Interpreting Political Economy of Tamil Nadu (Cambridge University Press 2021, co- author) and Rethinking Social Justice (Orient Blackswan 2020 co-editor).