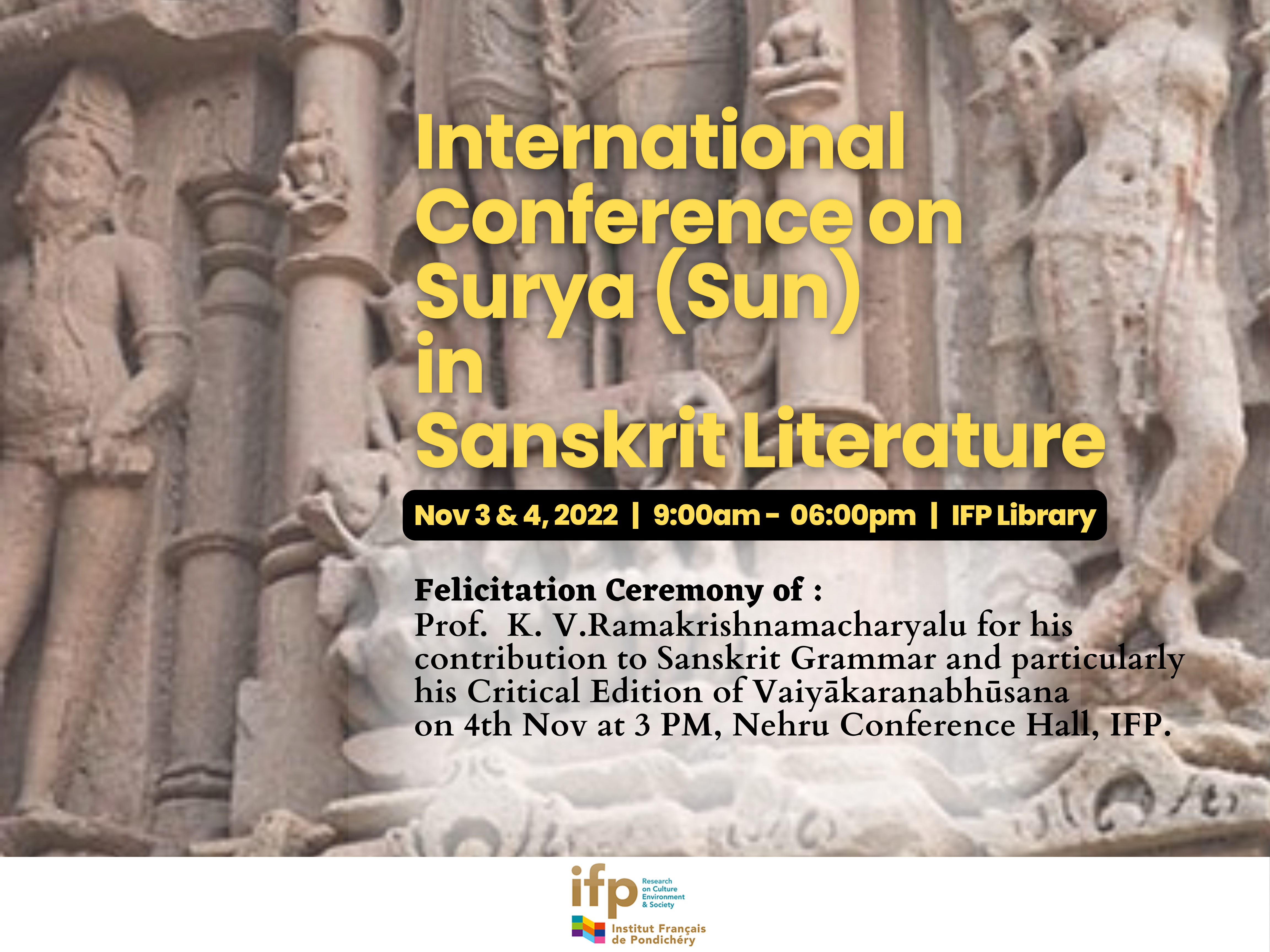 Sūrya or Sun is regarded as the Supreme soul, the Lord of all the Gods. The cause of all creations, the selfexistent and the unborn. Sun is indeed the symbol of the supreme, it is no doubt a resplendent manifestation of Lord Brahman. In the Vedic period (1500–5th century BCE) several other deities also possessed solar characteristics, most of these were merged into a single god in later Hinduism. Sūrya was once ranked along with Viṣṇu, Śva, Śkti, and Gaṇeśa, and many temples dedicated to him are found throughout India. These five deities are worshipped by a group of Brahmans (priests), the Smārtas, but only a small group, the Saura sect, worships. He is, however, invoked by most Hindus, and the Gāyatrimantra, uttered daily at dawn by many Hindus, is addressed to the Sun. His power was conceived of as dispelling darkness, curing disease, and heating and illuminating the world. Sūrya is the mythological father of many notable sons, including Manu (progenitor of the human race), Yama (god of the dead), the Aśvins (twin physicians to the gods), Karṇa (a great warrior in the Mahābhārata), and Sugriva (king of the monkeys in the Rāmāyaṇa). The Purāṇas (collections of Hindu myths and legends) record that the weapons of the gods were forged from pieces trimmed from Sūrya, whose full emanation was too bright to bear. Sculptures of Sūrya often show him in “northern” or Scythian dress—close-fitting coat and high boots—suggesting an influence from Iranian Sun cults. He is commonly represented in a chariot drawn by seven horses or by a single horse with seven heads, holding full-blown lotuses, his head surrounded by a nimbus or by rays. One of the most splendid temples dedicated to Sūrya is the 13th-century Sūrya Deula (“Sun Temple”), once called the Black Pagoda, at Konark, in Odisha. There the whole structure is conceived as a chariot on wheels in which the Sun god rides across the heavens pulled by prancing horses. Yāska gives three types of classification of Vedic gods, as belonging to three different planes. The fire belongs to terrestrial sphere; air belongs to the atmospheric sphere, and the sun belongs to ethereal sphere.

According to Yāska there are only three Gods like Agni, Vāyu and Sūrya, who have diverse names due to their different work and functions. This view of Yāska is reflected in Bṛhaddevatā. The Ṛgveda significantly says 'may Sūrya protect us from heaven, Vāta from air, Agni from the earthly regions'. In the Ṛgveda, 133 separate hymns are addressed to solar deities. Apart from that, there are more than 2000 hymns, which are jointly addressed to deities along with the aspects of sun. The year, the seasons and the movements of Sun were connected to Vedic sacrifices and rituals. The Sun who is beyond darkness and who is the supreme among the Gods paves the way for the attainment of the supreme light.

In the early Vedic age, the sun and its various aspects were invoked and worshipped. In Vedic period, Sun was worshipped in his various aspects and with his different dispositions like rising Sun, the Sun at its zenith, setting Sun and the nocturnal Sun. Agnihotra used to be performed at the time of sunrise. Gṛhyasūtra-s refer to the morning worship. In Vedic literature it is clearly stated that Sun was worshipped at different periods of the day. In the Chāndogya Upaniṣad seven point’s time of the day are mentioned for Sun worship. Śaṅkara reiterates this fact in his Chāndogyopaniṣadbhāṣya:

Many epithets and functions are attributed to sun and he is worshipped under various names such as Sūrya, Savitā, Pūṣan, Viṣṇu, Mitra, Varuṇa, Bhaga, Aryaman, Vivasvat, Aṃśa, Uṣas and Aśvins. Savitā represents the stimulating aspect of Sun, which is more prominent. Pūṣan, Viṣṇu, Mitra, Vivasvat and Aṃśa represent some particular aspects of the Sun rather than the solar orb. Mayūra is a celebrated poet of the 7th Century AD. Mayūra and Bāṇa are the two poets patronized by king Harṣa, finds support not only in the commentaries but also in some historical accounts. Though it is quite difficult to truce out the period and details of Mayūra still through historical evidence and the writing of other author’s literature, we are getting some details about Mayūra, who was a snake doctor and later on as a poet. Mayūra’s principal contribution to the Sanskrit literature was the Sūryaśataka, a hundred stanzas in praise of Sūrya. Which is one of the best text to praise Lord Surya. The Sambapurana also alludes to this. Keeping all this in mind and trying to understand more about Surya and the Mayūra’s thought about Surya, we are going to have a two-day International Conference on “Sun in Sanskrit Literature”. The research papers can be either in English or in Sanskrit. It gives us immense pleasure to inform you that the Department of Indology, French Institute of Pondicherry, is going to organize a two days International Conference on “Sun in Sanskrit Literature”. The conference is scheduled to be held on 3rd and 4th of November 2022. Academicians form different parts of India and abroad are welcome to participate in this event and present their valuable thought in this academic gathering.