French institute to the rescue of stolen idols 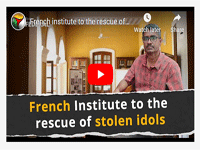 For decades, the French Institute of Pondicherry has been archiving photographs and documents on Tamil Nadu temple art and idols. Now, this is helping retrieve stolen idols, which were largely neglected.


"What are you going to do with this masterpiece?" asked Phylarkkas.

"What question is this? I am going to dedicate it to the temple in the King's palace," Saathan responded.

"What nonsense," hits back Phylarkkas, and suggests that it was so beautiful that it would be appreciated whether it was placed in a king’s harem or broken into pieces and thrown over a mountain.

This is a scene from the short story Sirpiyin Naragam (The Sculptor's Hell) written by Pudumaippittan, who is considered a pioneer of modern short story in Tamil. First published in the magazine Manikodi on August 25, 1935, the story is set in Kaveripoompattinam, an erstwhile port city in Tamil Nadu in the 11th century CE and revolves around Saathan, a sculptor who has just completed a life-sized Nataraja idol.

Phylarkkas, a Greek who was in town for business, had come to know Saathan through an unnamed Hindu hermit, who was a common friend. And Phylarkkas, on seeing the beautiful idol, is unhappy that Saathan is planning to dedicate it to the temple. He says that if the idol is kept inside the sanctum sanctorum of a temple in darkness, no one is going to appreciate its beauty.

However, the hermit views the Nataraja idol as an answer by Hinduism to defy Jainism which was growing fast at that time in the state.

According to author Gopinath Sricandane, this short story brings out the conflicting viewpoints of temple art. It also essentially captures how a beautiful idol, though a work of art, gains the quality of worship potential, even with the passage of time and irrespective of where it is kept, including inside a dilapidated temple.

This antiquity is highly valued by all, and is especially appreciated by collectors and idol thieves across the world.

K Ramesh Kumar, photographer-turned-archivist, French Institute of Pondicherry, notes that each and every information of an idol has its antique value.

"The shape, the material used, the period it was made and the name of the idol, (everything) has its own value. The value of an idol increases according to its antiquity," he says.