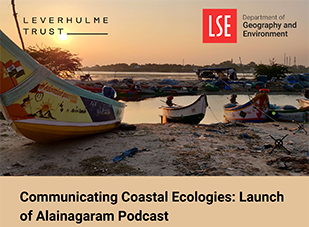 Sea coasts around the world and the seas themselves have been integral to the history of urban settlement in terms of the social, cultural and material movements they have enabled. The liminal materiality of seashores has historically engendered fluidity in inhabitation by fishing and nomadic communities. But these geographies are increasingly appropriated by developmental, state and environmental interests, their claims intensified by governmentalities of ecological vulnerability.

This podcast sets up a cross-disciplinary conversation on seacoasts, cities and the urban and political processes they are entangled in. The first series has a geographical focus on the shoreline of Tamil Nadu, on the southeastern coast of India, where interventions post the 2004 Indian Ocean Tsunami have affected sea change so to speak. Each episode features an invited academic guest to discuss their research on this coastline.

In initiating an academic conversation on political claims over coastal geographies, many of which arise from indigenous and labour movements, the launch event will grapple with the question of who the broadcast is for and how academic dissemination can contribute towards effective political communication with and for the constituents of research. 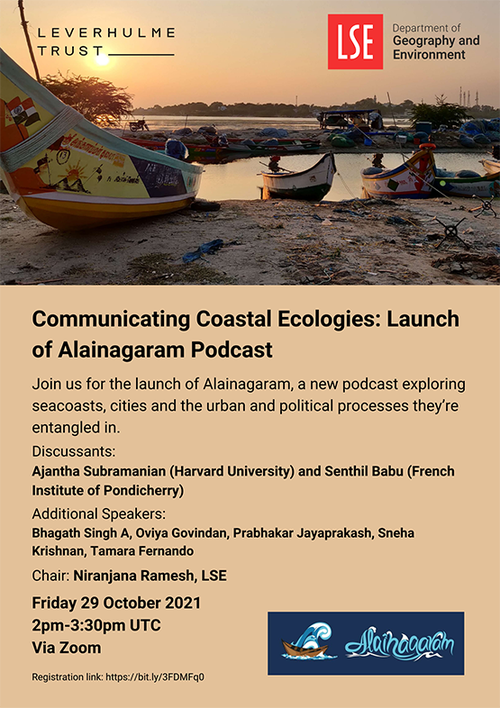 Ajantha Subramanian - Professor of Anthropology and South Asian Studies at Harvard University. Her research interests include political economy, political ecology, colonialism and postcoloniality, space, citizenship, South Asia, and the South Asian diaspora. Her first book Shorelines: Space and Rights in South India (Stanford University Press, 2009), chronicles the struggles for resource rights by Catholic fishers on India’s southwestern coast, with a focus on how they have used spatial imaginaries and practices to constitute themselves as political subjects.

Senthil Babu- Historian of science, based at the French Institute of Pondicherry

Senthil has been building a research programme in Nature, Knowledge and Labour which has a significant focus on the Coromandel Coast. His book on the social history of mathematical practices in south India will be published soon by Oxford University Press, Delhi. He is involved in wide-ranging labour, land and environmental struggles in the region and is part of the coastal people's right to life movement in Tamil Nadu.