The IFP participates in the Delhi Sustainable Development Summit (DSDS) 2015 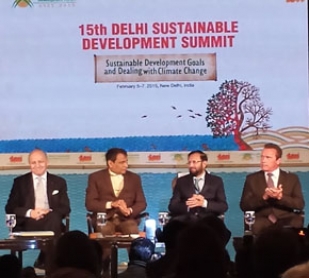 The IFP participates in the Delhi Sustainable Development Summit (DSDS) 2015

The United Nations Climate Change Conference, COP21 or CMP11 will be held in Paris, France in 2015. The international climate conference will be held from 30 November to 11 December 2015. This will be the 21st yearly session of the Conference of the Parties (COP 21) to the 1992 United Nations Framework Convention on Climate Change (UNFCCC) and the 11th session of the Meeting of the Parties (CMP 11) to the 1997 Kyoto Protocol. The conference objective is to achieve a legally binding and universal agreement on climate, from all the nations of the world.
In this framework, and as a preparatory meeting for the Paris 2015 climate meeting, the French Institute of Pondicherry participated in the 2015 Delhi Sustainable Development Summit (DSDS), the 15th edition of which was themed "Sustainable Development Goals and Dealing with Climate Change". The DSDS, an international platform to facilitate the exchange of knowledge on all aspects of sustainable development, has been organized by the Energy and Resources Institute (TERI) annually since 2001. Over the past fourteen years, the DSDS has emerged as one of the foremost fora on issues related to global sustainability. This flagship event of TERI brings together various Heads of State and Government, thought leaders, policy-makers and the crème de la crème of industry and academia to deliberate on myriad issues. Among the various Heads of State and Government of over 50 countries that participated in the 15th edition, were HE Mr. Laurent Fabius, Minister of Foreign Affairs and International Development and Former Prime Minister of France, as well as HE Ms. Ségolène Royal, Minister of Ecology, Sustainable Development and Energy, Government of France. This Summit was of much relevance to the ongoing works of the French Institute of Pondicherry on climate change studies.
For more information on DSDS 2015: http://dsds.teriin.org/2015/

Opening of the 2015 Delhi Sustainable Development Summit (DSDS) in the presence of HE Mr. Laurent Fabius (2nd from left), Minister of Foreign Affairs and International Development and Former Prime Minister of France