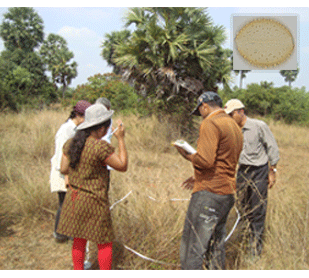 Technical training workshop on "Pollen based estimates of past land cover in South and Southeast Asia"
A first evaluation of results, methods and new approaches for climate (and paleoclimate) modelling


One of the best regions to study prehistoric human impacts on land cover is South and Southeast Asia, given its long history of occupation by humans and their prehistoric ancestors. Dominated by the monsoon, this region has a rich diversity of climates, topographies, reliefs and soils resulting in equally diverse plant or land covers, ranging from coastal mangroves to wet evergreen rainforests to temperate high altitude forests in the Himalayan ranges. Many of these (natural) plant habitats, even those remote or inaccessible, were inhabited at some point of time. Thus the story of the past land cover, especially during much of the Holocene, is as much a story of human impacts as it is a story of adaptation. Given the diversity of climate regimes across this region, it is a powerful natural observatory for lessons (of adaptation) going into the future.

Pollen remains one of the best evidences of past land cover. The very diversity of climate and landform in this region provides for challenges in land cover reconstruction using the standard approaches and methodologies adapted thus far. In Europe, modeling using the LRA (Landcover Reconstruction Algorithm) approach is widely applied to obtain quantitative pollen based land cover reconstructions. These provide a powerful basis to test quantitatively the impacts of land cover and land use in driving climate feedbacks and the global carbon cycle. Though challenging, there are by now promising results coming from diverse sites in this region. The PAGES co-funded LandCover6K workshop, which will be held at the French Institute of Pondicherry, is intended as a platform to bring together ECRs and other scientists from the region to sit together with palynologists, archeologists, botanists and the regional modeling community on the one side and some of the pioneers of the main methods of LandCover6k on the other.

The workshop will start a synthesis of the newly available Relative Pollen Percentages (RPPs) for the region, present the completed land cover reconstructions and help work together with ongoing reconstructions as both the application of this approach and results from the same are in progress and in several cases require, as stated in the title of the workshop, new approaches.

This workshop aims to help achieve the larger goals of the LandCover6K working group and specifically work packages WP-LC6 under a) Pollen based REVEALS and b) WP-LU6 under Archeology/ history based landuse as listed below:

(2) to kick-start, at least the pollen database (if not a multi-proxy one including modern analogues) for the larger south and southeast Asian region

Registration for this workshop is number-limited (invited participation). The workshop is full now but talks and Special Lectures remain open to students from the local colleges and University who are advised to email the Workshop Convenor in advance.

Workshop Report: Holocene land cover and land use in South and Southeast Asia for climate modeling