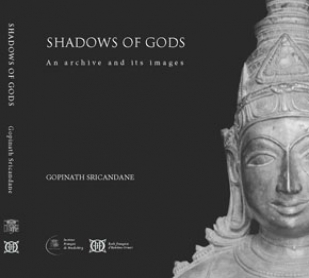 The book "Shadows of Gods: an archive and its images" jointly published by the French Institute of Pondicherry (IFP) and the Pondicherry Centre of the French School of Asian Studies (EFEO), will be released in New Delhi on January 25, 2016 by Indian Prime Minister Narendra Modi and French President François Hollande on the occasion of his visit to India as the Chief Guest for the country's 67th Republic Day.
Press Note
Shadows of Gods: an archive and its images or how a French collection of photographies for scientific purposes became a cooperation tool with India, to trace stolen idols and art, and catch international traffickers who pillage Indian heritage. This book retraces in detail how photographic evidences from this archive led to the arrest of Subhash Chandra Kapoor, a New York-based art dealer and one of the most high-profile smugglers of antiquities. At his behest, idol thefts at the Brihadeeswarar temple, Sripuranthan and the Sri Varadaraja Perumal temple in the village of Suthamalli were orchestrated. It narrates how the statues eventually made their way to the foremost art galleries around the world, through the vast and elaborate smuggling channels set up by Kapoor. The last illustration of this is the bronze statue of Nataraja from the Sripuranthan temple, which found its way to Australia, was returned to India by the Australian Government last year, based on evidence provided by the IFP/EFEO Photo Archive.
The Photo Archive of the French Institute of Pondicherry (IFP)1 and the Ecole Française d'Extrême-Orient (EFEO) 2 was started in 1956. It is a unique resource for visual information about South India in the second half of the twentieth century, focusing on temple art. As of today it has over 1,35,000 images covering South Indian iconography, temple architecture and rituals. It is a precious testimony to the rich culture of South India, and serves as a way to keep our memory of such invaluable heritage alive.
In addition to being a useful resource for researchers, this unparalleled collection is now becoming a high-value source of evidence in cases involving art theft. The IFP/EFEO Archive is often the only comprehensive visual record of many of the antique idols that were found in ancient temples across Tamil Nadu.
Shadows of Gods: an archive and its images is a reflection of the strong ties that exist between France and India in the area, among others, of heritage preservation.

Note to editors:
About the author: Gopinath Sricandane is a photographer, designer and writer based in Pondicherry.
Institut Français de Pondichéry (IFP - French Institute of Pondicherry) is an interdisciplinary research centre under the supervision of the French Foreign Ministry and the French National Centre for Scientific Research (CNRS). It has three main missions: research, expertise and training, and conducts research in the fields of Indology, Ecology, Social Sciences and Geomatics.
École française d’Extrême-Orient (EFEO), founded in 1900, is a research institute under the French Ministry of higher education and research. The EFEO’s mission is research and training, principally by field work, in all the disciplines involved in the study of Asian civilizations, particularly those of South, Southeast and East Asia.
Contact:
Anand Pakiam (ifpcom@ifpindia.org)