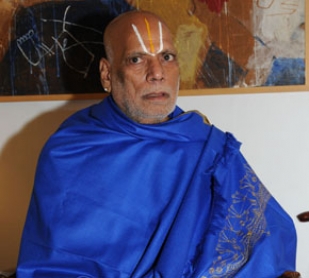 The Indian government on Monday 25th January 2016, announced the 2016 Padma Awardees. We are happy to inform you that Prof. N.S. Ramanuja Tatacharya (see: http://www.ifpindia.org/tatacharya-nsr), first Vice-Chancellor of Rashtriya Sanskrit Vidyapeetha, Tirupati,  and Honorary Professor at the French Institute of Pondicherry (IFP)  (see attached CV), has been selected for the ‘Padma Bhushan’ award for the year 2016 for his outstanding contribution to Sanskrit language and literature.
The Padma Bhushan is the third highest civilian award in the Republic of India, after the Bharat Ratna and the Padma Vibhushan, but comes before the Padma Shri. It is announced on the occasion of Republic Day of India every year. It is conferred by the President of India at a function held at Rashtrapati Bhavan sometime around March/ April. The award was established on 2 January 1954 by the president of India. It is awarded to recognize distinguished service of a high order to the nation, in any field. As of December 2015, 1230 people have thus far received the award.
Prof. Tatacharya has been the recipient of several awards including the highest Civilian Award of France, Chevalier de la Legion d’Honneur, Certificate of Honour by the President of India, Srivani Alankaran by Dalmia Trust given by Late Prime Minister Sh. P. V. Narasimha Rao, the Vacaspati Puraskar of the K. K. Birla Foundation, Lifetime Achievement Award of the Indian Council of Philosophical Research New Delhi, Viswabharati Puraskar - the highest award for lifetime achievement in Sanskrit by Uttar Pradesh Government, and innumerable titles awarded by various heads of establishments in South India for his contributions to the spread of Indian philosophies, Sanskrit language, and the rich cultural heritage hidden in terse texts which were made available to common man in the form of simple Sanskrit commentaries and original texts.
Prof. Tatacharya’s original works include Vivriti, a commentary on Jnapaka Sangraha; Balabodhini, a commentary on the Panchalakshani Gadadhari (Nyaya); and Balapriya, a commentary on the Tarkasangraha Dipika Prakasika (Nyaya).  Prof. N.S.R. Tatacharya is also renowned for his scholarly work in 4 volumes titled "Sabdabodhamimamsa", published by the French Institute of Pondicherry and the Rashtriya Sanskrit Sansthan, New Delhi. He also published, through the French Institute of Pondicherry and the RSVP, Tirupati, the Vyutpattivada in 2 volumes, in which he made a commentary on the Vidvanmanorama. In 2015, he published the Bhattatantrarahasyam in which he made a  commentary on the Saraprakasa.
You will find a below a selection of press articles on the awards in which Prof. Tatacharya's name is listed:
- The Hindu, 26/01/16: http://www.thehindu.com/news/national/tamil-nadu/recognition-for-lifetime-of-work/article8153377.ece
- The Hindu, Chennai, 26/01/16: http://www.thehindu.com/news/cities/chennai/awardees-happy-vow-to-rededicate/article8153522.ece
- The Indian Express, 26/01/16:  http://indianexpress.com/article/india/india-news-india/padma-awards-2016-full-list/
- The Hindu, Tirupati, 26/01/16: http://www.thehindu.com/news/national/andhra-pradesh/elation-in-chittoor-district-over-padma-awards/article8153179.ece
- India Today, 25/01/16: http://indiatoday.intoday.in/story/full-list-of-padma-awardees-2016/1/579218.html
- The Hindu Business Line 25/01/16: http://www.thehindubusinessline.com/news/national/padma-awards-2016/article8151221.ece
We congratulate Prof. N.S.R. Tatatcharya for this outstanding achievement!