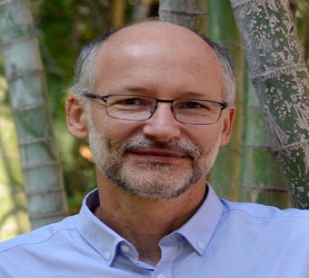 Prof. Frédéric LANDY took up his post as the new Director of the IFP officially on October 1, 2016. He replaces Dr. Pierre GRARD, who left after 4 years spent at the Institute and who has now been appointed in Nairobi, Kenya, as the new Regional Director of the CIRAD and representative of the INRA and the IAVFF/Agreenium for East Africa.
Prof. Frédéric LANDY is 53 year old. He has been teaching social geography at the University of Paris Ouest-Nanterre, France, since 1992. He is a fellow of the UMR LAVUE laboratory, and an associate fellow of the Centre for South Asian Studies (CEIAS), Paris. Mr. Landy is well acquainted with Pondicherry and the IFP given that in 1988-91, he had conducted his PhD research in the framework of the IFP project entitled « To Migrate or to Stay », coordinated by Dr. Jean-Luc Racine. Since those days, he has kept himself in touch with various teams and projects at the IFP. He has authored several books and articles on Indian agriculture, rural issues, slum policies. He was the coordinator of a French National Agency for Research (ANR)-supported project entitled "Urban National Parks in Emerging Countries" (UNPEC, 2012-16) that compared the national parks in Mumbai, Nairobi, Cape Town and Rio de Janeiro. He is now coordinating the Indian case study (in Uttarakhand) of another ANR project entitled « Whose Landscape in Asia? » (AQAPA) focused on the relationships between minorities, landscape, agriculture and tourism in rural highlands of  India, Nepal, China, Laos and Vietnam.