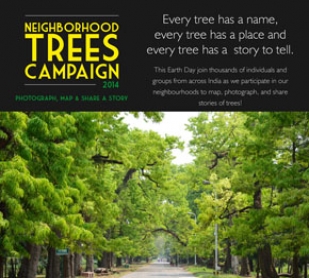 There are about 7,500 tree species in India. And it is important to document each of these species and their distributions in the landscape for conserving India’s rich tree diversity. The neighbourhood trees campaign being initiated on Earth Day 2014 attempts to create a page for every tree species in India and crowd source their distribution. R Ganesan a plant taxonomist at ATREE is one of the organizers of the campaign. He says, “Good descriptions of these species and their distribution is not easily available to citizens. Some recent tree field guide books by Pradip Kishen and others have helped in raising awareness. Still much more needs to be done. Further, seasonality, flowering patterns and fruiting patterns need to be studied to understand local and global climate changes. Citizens across India participating in collecting and contributing information will advance the scientific knowledge of trees in particular and ecology in general. Projects like SeasonsWatch, eflora india, address some of these issues. It it very important that such efforts get a fillip.”
With growing urbanization in India, many parks and gardens are being developed with trees planted and nurtured. On the other hand, road widening projects, building projects and other infrastructure projects are taking a toll on the trees in neighbourhoods. Over the last fews years, the million trees campaign in New York, the trees census project by the Chennai Corporation, the Neralu festival in Bangalore and others have increased citizen awareness on trees.
Trees are very important for urban landscapes. They help providing a range of ecosystem services including cleaning the air, harbouring biodiversity, providing shade and relief, and aesthetics to urban landscapes. Plants are one of the early forms of life on earth. They form the foundation for much of life which depend upon the plants for energy, nutrition and sustenance. The tropical world has been endowed with a wide diversity of tree species and the intent is to describe and map every tree species in India. Gladwin Joseph, from Azim Premji University says “The objective of the campaign is to start a process where local citizen groups start observing and documenting trees in their neighbourhood. In a highly populated country like India, over a few years we will be able to record and describe all 10,000 odd trees species in India. This will be a valuable, publicly available resource for all citizens and scientists of the country and would hopefully lead to better conservation and better environments for its people”.
TreesIndia is a group under the India Biodiversity Portal. Prabhakar and Thomas Vattakaven, of the India Biodiversity Portal who lead the campaign say “The campaign is mainly done on the Internet and on social media. Although the India Biodiversity Portal has been in existence since December 2008, many do not seem to know of the open data portal. This campaign will expose the portal to the large Internet enabled citizens of the country to connect, contribute and share biodiversity information from different geographies of the country. Over time this can grow to be a rich and open access repository of the biodiversity information for India.”
To participate in this fun activity with friends and neighbours, with fellow students and to create an awakening in one’s neighbourhood to conserve neighbourhood trees, or to join in the larger goal of documenting and mapping at least one individual of every tree species in India, folks can can sign up treesindia.in and register now. Queries can be posted to treesindia@indiabiodiversity.org.
The campaign is a collaborative activity of the `treesindia.in’ at India Biodiversity Portal in association with The French Institute, ATREE, SeasonWatch, Nizhal in Chennai, Keystone Foundation in Kotagiri, Strand Life Sciences, Azim Premji University, Wipro, Earthian, eflora India, and many others. Volunteers for the campaign will be running local events across more than 30 locations across the country.
For more information: http://treesindia.indiabiodiversity.org/page/51