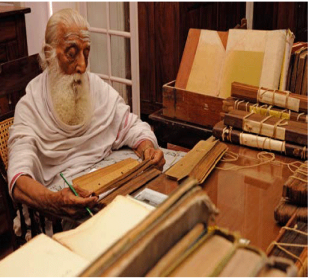 The French Institute of Pondicherry (IFP) on behalf of the entire staff extends its deepest condolences on the sad demise of Sri S. Sambandasivacharyaon 16/06/19 at his house in Cuddalore. The 92 year old, S. Sambandasivacharya’s solid dedication to service and his devotion to ethics and integrity made him a remarkable scholar in his field unlike any other. The effects of his passing are already being felt here by his fellow employees and management but his work here will not soon be forgotten and shall remain forever, not only in the history of IFP but also in the studies of Agamas.
Sri S. Sambandasivacharya joined the French Institute, Pondicherry as Research Assistant in the project on critical editions of Saivagama-s in 1969. Since then for 50 years this senior most staff of the Institute has been diligently assisting in the critical editions of many of the Saiva Agama-s : Matangaparamesvaragama, Ajitagama (vol.III), Rauravagama (vol.III), Diptagama, Vols. I and II to list a few. He also worked as Assistant to Dr. V. Raghavan for 10 years in the work of critical editions. His contribution was essential, notably because he was well trained in reading the old manuscripts copied in such scripts as Tamil, Grantha, Telugu, Malayalam, Tigalari, Sarada, Nandinagari and Newari.
Sri Sambandhan was one of the very important persons who were instrumental in the collection of manuscripts for IFP since 1970. In recognition of his contribution to Sanskrit studies he was conferred : - the Palmes Académiques award in 2009 by the Government of France and - the Presidential Award of Certificate of Honour for the year 2014 by the Government of India for lifetime achievement in Sanskrit language and literature.
Graduated at the Sanskrit College Mylapore, Chennai, he had received two traditional titles, Siromani in Sanskrit Literature and Mimamsa.
IFP joins hands with his family to overcome this irreplaceable loss and the void that has befallen.
With sincere sympathy,
Director & staff, IFP