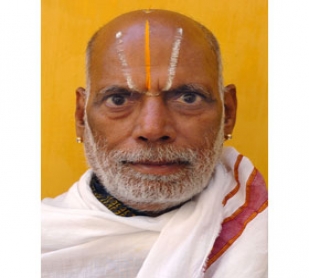 It is with deep sorrow that we inform you of the demise of Prof. N.S. Ramanuja Tatacharya on June 5th 2017 morning. His cremation was held in Mumbai at 11 a.m. on June 6th.
His passing away is an irreparable loss to his family, to the French Institute of Pondicherry and to Sanskrit world. The void created by his demise will never be replaced by anyone and he will continue to hold a permanent place in the history of Sanskrit literature and specially in the world of traditional Sanskrit scholarship (panditaparampara).
We convey our sincere condolences to his family, students, fans and followers and wish them strength and courage in these difficult times. Our thoughts and prayers are with them.
-------------------------------------------------
Brief Presentation of Prof. Tatacharya:
Professor N.S. Ramanuja Tatacharya is one of the most prominent authorities in these sciences (sastra), which form the heart of Indian culture of Sanskrit expression, namely Logic (Nyaya), Grammar (Vyakarana) and Exegesis Mimamsa and Vedanta).
He worked as a Professor in Nyaya for more than thirty years and in 1989 he became the first Vice Chancellor of the Rastriya Sanskrit University, Tirupati. Then in 1993, he became a member of the French Institute of Pondicherry.
In recognition of his outstanding contribution to the research, collaboration and knowledge dissemination missions of the French Institute of Pondicherry, he was conferred with the prestigious French award “Chevalier de la Légion d'Honneur” in 2011. He also received more than 25 awards from the Government of India and various institutions, few among them are cited below.
1. Padma Bhushan, India’s third highest civilian honour by the Government of India for his outstanding contribution in the field of Sanskrit, in 2016.
2. Vedacatussastra Ratnakara Paundarikapuram Asramam, Srirangam,
3. Desikadarsana Chudamani: Srirangam
4. Panditaratnam Parakala Mutt. Mysore
5 ) Received Cash Awards from :
I) H.H. Sankaracharya of Kanchi and Sringeri.
ii) H.H. Sri Andavan of Srirangam.
iii) H.H. The Pontiffs of Pejawar Mutt, Udipi
iv) Sri Raghavendra Mutt, Mantralayam.
6. Sastranidhi Avadhuta Datta Peetham Mysore
7. Maha Mahopadhyaya Rastriya Sanskrit Vidyapeetham, Tirupati, & LBS Rastriya Sanskrit Vidyapeetha, New Delhi
8. Ramakrishna Dalmiya Sri Vani Alankaran Award with Rs. 2 lakhs.
9. Vacahaspati Puraskar, K.K. Birla Foundation with Rs. 1.00,000
10. Sastrakalpadruma. Rastriya Sanskrit Sansthan, New Delhi