Demise of Jean-Pierre MULLER, former Director of the IFP 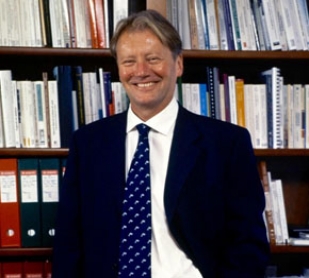 Demise of Jean-Pierre MULLER, former Director of the IFP

We have just learnt, with great sadness, of the sudden demise of Jean-Pierre Muller on August 25, 2015, at the age of 69.
An agronomist by training, a soil scientist and a specialist of lateritic soils and their mapping, Jean-Pierre Muller worked in many tropical countries in Africa, Asia and South America, in close collaboration with scientists and officials of these countries. At the French Institute of Scientific and Technical Research for Development and Cooperation (ORSTOM), he created the Laboratory of Physical Soil Analysis in Bondy (1982-1985) and led the research unit “Geosciences of the environment” (1993-1997). He also strongly associated himself with universities and students. He played a key role in the transformation of ORSTOM into the French Research Institute for Development (IRD). Director General of the IRD from 1998 to 2003, he set up its new operational structures and  evaluation methods. He led the reorganisation of services at the institution’s headquarters and signed a four-year development contract with the State.
Passionate about the development of South and South-east Asia and more specifically India, he assumed with much dynamism, from 2003 to 2008 the position of director of the French Institute of Pondicherry (IFP), one of the main research and training institutions under the supervision of the French Ministry of Foreign Affairs and International Development. He resolutely implemented a policy of project-based research and initiated mechanisms to enable researchers to look for finances and raise external funds.
Jean-Pierre Muller devoted his entire career to North-South scientific cooperation. Besides being a well-established scientist, he was also a man of culture, in love with India and its culture, a man of  great sensitivity and an exceptionally talented photographer.
Messages of sympathy can be sent to his spouse, Sita Muller, with whom we deeply share the pain of this loss.
Sita Muller
4 rue de l’Exposition
75007 Paris
France
Or
Sita Muller
106, Sainte Therese street
Pondicherry 605 001
India
Sincerely,
Pierre GRARD
--
------------------------------------------------------
Dr. Pierre Grard
Director
French Institute of Pondicherry
UMIFRE 21 CNRS-MAEE / USR 3330
11, St.Louis Street
PO Box 33
Pondicherry 605001
India
Tel. : +91 413 2231608
Tel. : +33 (0) 9 70 44 57 72
Fax  : +91 413 2231605
e-mail :ifpdir@ifpindia.org
website :http://www.ifpindia.org
------------------------------------------------------