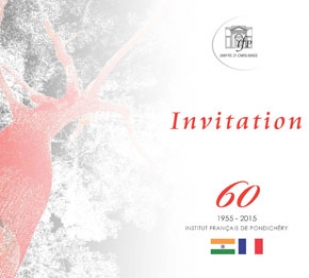 The French Institute of Pondicherry (IFP), the largest of the research institutes dependent on the French Ministry of Foreign Affairs and International Development (MAEDI), will be celebrating its 60th anniversary in 2015. The celebrations will take place on 18 and 19 November 2015. A series of roundtables are planned to mark the first day of the celebrations with eminent experts engaging in discussions relating to the research at the Institute, in the fields of Indology, Ecology and Social Sciences. An open day on the second day will allow the general public to discover the IFP's unique collections and to interact with the researchers. This anniversary will bear witness to 60 years of high level scientific cooperation between France and India.
Tentative programme schedule