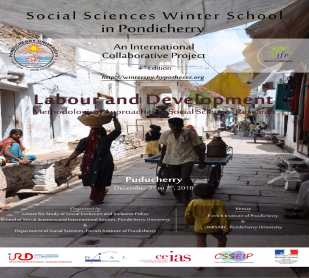 The major thread of this 2018 Social Sciences Winter School will be to address societal challenges at the intersection between labour and development.
Only recently, international organisations placed labour in the spotlight of development research and policy making (UNESCO, 2012; World Development Report 2013; Filmeret Fox, 2014; OECD, 2017). However, it is noteworthy that academic and policy studies over the past decades took little hold of the subject to investigate the multifaceted nature of the link between labour and development, notwithstanding a strong interest around labour-related issues (such as forms of workers organisation, involving strike movements and unions) notably in history under Marxist influence from the 1950-60s onwards (Morris, 1965). A possible explanation for this gap in analytical focus and understanding is likely to be found within former dynamics backed by academic and policymaking discourse on development. For example, following the fast capital accumulation-driven transformation of the Soviet Union from a poor agrarian to an industrialised economy, the 1950s were dominated by logics of development via accumulation-driven growth. Labour was seen as an automatic – and homogeneous – complement to capital in this accumulation process. In other words, labour was considered a peripheral component of the development process.

The new deadline for registration is October 22, 2018
Please fill in and submit the electronic application form via the following link:https://docs.google.com/forms/d/e/1FAIpQLSeMtxKM2pWebCqbdNRsbp__HL8CSUdY9GkeYonK1hIodrIa4A/viewform?c=0&w=1
The application should further include:

Postgraduate degree certificate
These 2 documents should be sent by email to winterschoolpy@gmail.com

The registration fees of Rs. 3,000 are payable on arrival (Rs. 700 for Pondicherry University Students)
Selected students will be offered accommodation and food in Pondicherry for the duration of the programme
Selected students will be offered round trip train fare (Sleeper Class).
Contact
All correspondence should be addressed to the team of coordinators: winterschoolpy@gmail.com
More information and detailed programme will soon be available on the website of the Winter School: http://winterspy.hypotheses.org